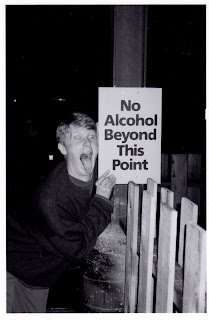 Last weekend I ran into an old friend who is totes birthing a turd baby because he’s on the verge of turning thirty. I realize it’s natural for him to have the panic shits about this stuff, but eventually I grew tired and finally told him to STFU about it already; and just follow these 3 simple rules:

Choose the right location.
College towns are no place for any self-respecting 30-year old. Now, that doesn’t mean any town that has a college. (For example, many cities have colleges, and I can think of no better place to turn thirty than in the city.) What it means is any town that is defined specifically by its college presence. Basically if you went to a state university, you’d best not be turning thirty there. You’ll have absolutely no chance of getting laid on your birthday or ever again because you just became the old guy that never left. And that’s the depressing kind of shit that college chicks hate. It’s weird because it’s just the opposite in the city. Girls in their twenties love dudes in their thirties. Which leads me to my next bit of advice…
Stay single or, if need be, get single.
There’s this big myth that once you turn 30 you should settle down and start procreating. Absolutely do not fall for this load of garbage! This age-old falsity was created by people that made that mistake and want everyone else to suffer for the rest of eternity because they did. There are so many potential having-the-time-of-my-life years that you can easily blow by participating in premature monogamy. Your early to mid-thirties are your last chance to summon the vigor of your youth and deliver the ferocious poundings that twenty-something women crave. The older you get the more your back hurts and the smaller your boner gets, so take advantage of time while it’s on your side. If kids are in the plans, wait until you’re like 38 or something and then find a woman that’s five to ten years younger than you. This way you’re not missing your fun-having window and she’s not missing her baby-having window.
Stay young.
Most importantly, don’t abandon your youth. If you were one of the lucky ones who stuck with punk rock beyond 8th grade you already know this. If not, well then, perhaps it’s time you get reacquainted with your younger self. Find new music, enthrall yourself new artistic endeavors, pick up the guitar again (or for the first time,) learn Ableton Live, ride a bicycle, etc. In order to stay young, it’s also important to take time to reflect. You know; start a blog where all you talk about is the salad days.
Fuck, you’re only 30.
Also, it’s never too early to start a vitamins-fish oils-glucosamine-skin care-sleep-water and reverse missionary routine.
(pic-Portland, OR, early 00s)