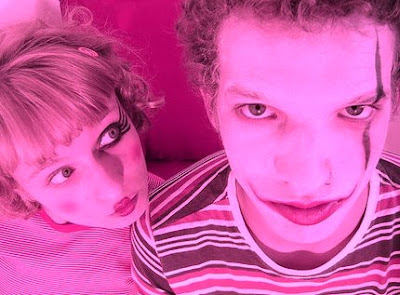 I love crazy people. I’m still fairly new in town and I haven’t met any people who are sufficiently crazy, but not too crazy, for my tastes. If you’re gonna ask me to play favorites, I think I like Bipolar Schizophrenics the most.

SamMy friend Sam is a good example of this. One time, when he was between medications, he had a psychotic episode where he walked into the local hospital back home and started claiming he had the power to heal. The staff put up with it for a couple minutes and then gently asked him to leave, but he refused cuz he was on a fucking mission from God! So they called security and that’s when he really flipped shit. He blacked out and punched a lady cop in the face, then promptly fell on his back and, according to him, “A stargate opened and my soul returned to me.” Then he went to in jail. He really is a teddy bear of a fellow when he’s properly medicated. I was talking to him a few days after the episode and he was like, “Yeah… the police report is actually pretty funny.” If you wonder where Sam gets his crazy, his dad is even worse. Pappa Sam is full blown Bipolar and batshit crazy to boot. He’s missing the tip of his left index finger and when he gets real riled up he calls it his “devil finger” and slams it on the table repeatedly in an attempt to get the devil out. He’s a fun guy to talk to, but you have to be very patient, especially when he tries to sell you a TV or something… even after you’ve repeatedly told him you aren’t interested. More often than not, he’ll try to play really bad country music loudly while you’re watching a movie too.

Fat Baby
Next on my list of all-star crazy friends is a cat named Fat Baby. I have no idea why he calls himself Fat Baby, but he has it tattooed down his forearm. For the longest time I thought it was just constantly scrawled in sharpie, but it was just a really bad tattoo. I’ve known him for a long time. He used to do dishes at this placed I’d got for brunch on Sundays when I was 16 or something. Then he did dishes at Perkins where I would hang out and smoke cigarettes and drink coffee cuz that’s what all the cool 17 year olds were doing. He somehow always managed to find me and talk to me about madness. I used to play bass in a punk band when I was 15 and he saw me play once. So he was always telling me what a good guitar player I was and how we should jam sometime. Ehh? Whatever. I always had to dodge that question. Then fast forward a couple years and he finds his way onto the scene. Most of us knew better than to let him do any drugs or drink any booze, but every once in awhile there’d be that kid who’d hand Fat Baby the pipe and then he would get craaaazy stoned. I’m really glad I missed the one night the boys let him try Tussin… aye. So anyways, one night he’s stoned out of his gourd and decides that I’m the only person in the room worth talking to. And he says something to the effect of “I have to listen to all the words that are coming out of everyone’s mouths all at the same time. You know why? Because it’s the voice of God speaking through everyone all around me.” This heavied the shit out of my poor 18 year old self. In retrospect, it isn’t all that bad, but it made me nervous. Especially when his crazy eyes were staring into my fucking soul. Or at my tits… one of the two. He also borrowed my ex’s bike and somehow managed to throw it under a train. We’re still not quite sure how that happened, but Fat Baby’s mind works in mysterious ways.

Norton
This guy was a real piece of work. He was obsessed with the local Catholic high school’s football team. He would frequently wear their football jerseys and occasionally wear the helmet to match. He also had a band called Motley Christ which had a different line up every time they performed. This was because he would ask people to play with him right before the show. I even performed once on some other girl’s bright pink guitar. He would sing songs about Jesus from lyrics he had written down in a beaten up notebook. The only one I ever remember was about how he wanted to find a girl who was willing to get down on her knees. And pray. I don’t think he saw the same humor in it that the rest of us did. He’s just always been around, as long as I can remember. All the way back to when I first started going to local punk shows at the tender age of about 13. I haven’t seen him in years, but I imagine he looks exactly the same. Fat, short, and bad. Usually pretty smelly. Still wearing that damn blue and yellow jersey.

God bless the crazies in my life. They keep things interesting. I don’t understand why they all have this serious God thing going on. Perhaps there’s a strong link between Christianity and insanity. Either way, I feel like they’ve made me more tolerant of all our crazy differences. Some folks are just more vocal about the madness that goes on inside of their minds. And those people are usually on lots of medication - and lots more fun than all the normal folk.

-Doomgoblin
I'm Faster Than My Shadow
Send your RSCs to bnb@hotdogdayz.com