Reader Submitted Content: That One Time I Lived With A Lesbian 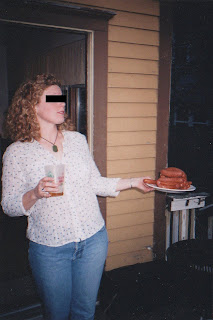 I’m straight. I can’t help it. Older lesbians would try to recruit me when I was in high school. Apparently I wasn’t aware that having soccer mom short hair instantly made me a lesbian. Fast forward to college and I was even known to kiss a girl or two. But kissing is fucking fun, so I’ll kiss whoever I want - and if it gives freshman boys boners, all the better!

I was also that loser girl who lived in the dorms all the way through senior year, but there was that one summer circa 2007 where I subleased a room in a house. I knew one of the guys living in the house, but not the other guy. And, of course, the other guy was this annoying vegetarian who didn’t have to pay rent because his daddy owned the house and still ate chicken flavored ramen noodles with the DEHYDRATED CHICKEN seasoning packet…because that’s what his fucking daddy bought him. And his annoying-as-fuck girlfriend (who desperately wanted to be that chick from Amelie) practically lived there too. She got mail there and would leave her laundry in the dryer and her SHOES ON THE TABLE. Not to mention their fucking dog that shat everywhere… ugh.

Enough about that. Things got real interesting when the “it’s okay to eat dehydrated chicken and call myself a vegetarian” guy’s sister moved into our happy, dog shit-filled abode. She was a lesbian, and she was in love with me. It wasn’t a big deal at first. She was super cool and we got along really well. She would say sexy sort of things to me occasionally and I didn’t mind, because I’m all open minded and shit. Granted, not open minded enough to go muff diving anytime soon, but still fairly open minded. She drank Bud Light like it was water and had a tattoo of a dinosaur on her arm that some drunk 15 year old gave her. I used to go the gay bar with her on Wednesday nights because there was unlimited pizza and keg beer for $5. With bitchy drag queens lurking around the corners and gay boys waiting to ironically grind on me to Cher(?), I was practically in heaven! That is, until my lesbian roommate decided that I was going to be her fake girlfriend. It was all because she accidentally drunkenly fucked this really gross girl, and the gross girl - surprisingly - fell in love with her and was pretty much stalking her. Any normal person would just confront the uggo and be like, “Sorry lady, mistake! Now leave me alone!” But this lezzie was no normal person. She decided it was a much better idea to say that I was her girlfriend and to constantly make out with me in front of the gross girl…. Why the hell did I go along with this? I can be pretty naive at times. It must be the whole Iowa childhood thing.

This cycle repeated itself for awhile, maybe a month or two. But things culminated one evening when we had some people over to consume massive amounts of Bud Light. I let a friend sleep in my bed because I thought it was a good idea to sleep in my lesbian roommate’s bed... With another dude... Because we were all gonna do it. Lezzie bitch passed out after a couple minutes, so it was just me and the dude going at it. We were making out, all was good and fun, but then the dude felt this warm wetness creeping towards him. That dumb bitch managed to piss herself and ruin my good time in her bed! Seriously! What a bitch! He decided that was a good opportunity to make his grand exit, so I stepped upstairs to see what was up. My friend was peacefully sleeping in my bed. WITH THE SHITTING DOG. Gross. So I went downstairs and slept on the couch. The lesbian had no recollection of the event and I kinda wanted to pretend it hadn’t happen. There were a few more gay bar adventures but it just wasn’t the same. I moved back into the dorms at the end of the summer and that was it.

But at least now I can say I’ve been pissed on by a lesbian.

Send you're RSCs to bnb@hotdogdayz.com