Doug: Don’t date trumpet players. Their egos don’t match up to anything else.
Erik: Don’t date guys from small towns. They grow up to be meth-heads.
David: Don’t date miniature Dave Grohls. Ever. There's a serious chance you'll be exposed to unhealthy amounts of "political punk rock".
Keith: Don’t date guys with kids and serious depression, no matter how good they play guitar.
Trent: Don’t date pill popping park rangers. But alliterate as much as possible.
Roger: Don’t date 43 year old… heroin addicts.… that you met at your court ordered AA meetings…... Shit… that was pretty obvious, wasn’t it?
George: Don’t date actors; they never stop acting. Was that the proper use of a semi-colon?
Thom: Don’t date guys who will never love you as much as you’ve always loved them. That pretty much just makes you a stalker with an agenda.
Chris: Don’t date stoner pastry chefs, they will just make your pants not fit right anymore. 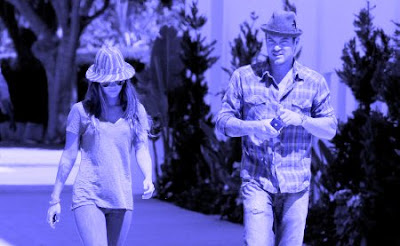 I, Doomy G, am probably the last person you would ever go to for relationship advice. You know this. Unfortunately, many of my close friends still seem to trust my opinion. I’ve even been called “insightful” on more than one occasion. The problem with being a young advice sage is that you never take the advice you give other people. It all makes sense when you are the observer on the outside, but when you’re stuck in the middle of all those DAMN EMOTIONS and your brain refuses to work logically…and well… you just feel dumb. But you’ve all been through this. I assume HDD readers are at least like, 45 by now (neener neener neeeeener!). Your hearts have been broken more than once. Prolly even more than twice, if you aren’t super humans from the future sent here to impregnate fertile women in a plan to eventually take over the Earth. Then again, I kinda like the idea of fertile women with swollen breasts and ample thighs just sliding down a rainbow across the earth and filling the planet with fully functional humans. Yet, I digress. But perhaps I don’t digress. Maybe the future consists of men shooting their loads into the heavens and lusty thick thighed women catch the seeds as they slide down rainbows and repopulate the earth! And then humanity might possibly make sense. Because of like, aliens and shit. Yeah. Fuck. Yeah.