Two and half weeks into the new year and I'm finally getting around to this. Personally, 2008 was a pretty good year. I'm not going to rehash it here; it's all in previous posts. One thing I've learned from reading other blogs (and taking advice from my own readers) is to keep it brief. Catering to short attention spans is crucial to maintaining an Internet audience. So with that, I'll just get started. By no means is this meant to be a comprehensive list. I didn't see a lot of movies this year and most of the music I bought wasn't from '08. Hell I didn't even read a book that I hadn't started the year before. Still, don't you dare, for even a second, think this is a weak list...

Best of 2008
Films
Pineapple Express...007: Quantum of Solace...In Bruges...Rambo (Panic-attack inducing gore. I suggest seeing it with a group of your buddies. And who doesn't love mercenaries?)...Slumdog Millionaire...Tell No One (US release)...The Dark Knight...Forgetting Sarah Marshall...Gran Torino (A little heavy on the racial slurs at times but all in the name of character developement.)...Indiana Jones & Kingdom of the Crystal Skull...Iron Man...Nick & Norah's Infinite Playlist...The Wrestler (Best movie of the year, hands down. Rourke is back, and breaking your heart in nearly every scene.)

Music
Baby Guts-The Kissing Disease CD...El-P & Dizzee Rascal @ Triple Rock...Doomtree-self titled CD...Cecil Otter-Yellow Rebel CD...Jay Reatard-Singles '06-'07 ('08 release) CD...Suicidal Tendencies @ Station 4 (There was a time in my life I thought I'd never see ST. Went with my uncle. Jason, Josh, Matty and Jack were all there, as was everyone in the TC you'd expect to be there. It was like a TC punk metal scenester reunion, spanning 3 decades.)...Big Business w/Melvins encore @ Triple Rock...Jake One-White Van Music CD...Triumph of Lethargy Skinned Alive to Death-Old Jail EP and Bird Songs LP (Everything they put out is just amazingly great.)...Jaguar Love-Take Me to the Sea...The Streets-Everything is Borrowed...Atmosphere-Sad Clown Bad Spring EP and When Life Gives You Lemons You Paint That Shit Gold CD (In all actuality, probably my least favorite Atmosphere albums. One of the best albums of the year, regardless.)...Chicago Apacolypticrust Fest II...Wild Billy Childish & The Musicians of the British Empire-Thatcher's Children CD...Dillinger Four-C I V I L W A R CD (The D4 is the kind of punk I don't really like anymore BUT I'll never not like the D4. This album makes it easy to skip all the Midwestern copycats and stick with the real thing.)...Against Me! & Ted Leo & the Pharmacists @ First Ave...Dillinger Four's D4th of July show @ Triple Rock...The Cool Kids-That's Stupid Mixtape...Desobediencia Civil-No Hay Libertad Sin Desobediencia CD (Actually an '07 release but I didn't get it until this year. It's so good, it would be a shame not to make the list.)...Beastie Boys @ Roy Wilkin's Auditorium (Greatest band in the world. Period.)

So that's about it...for now. I'll play catch-up on some of the stuff I missed and throw out an updated list later. As always, I'm gracious for anyone that has visited this silly little site. I always appreciate the feedback, even if you hate it. With the arrival of 2009 I've officially moved into a different marketing demographic. Apparently I'm not supposed to like wrestling or cool shoes anymore??? Whatever. I imagine you'll still be able to count on me when you need a fix of self-indulgent arrogant ramblings, punctuation misuse, pictures of me with food, or the world's shittiest advice column. And now the official unveiling of my newest moniker... 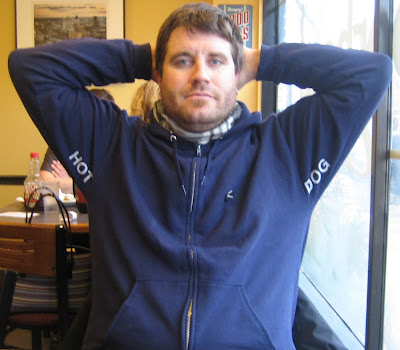 Here's lookin' at you "kid."
No comments: