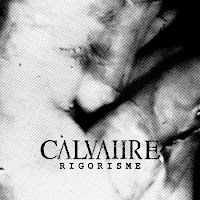 Calvaiire reign from Northwestern France—Laval to specific—and are described by their record label as an “intense and pissed off dark hardcore/crust band.” From listening to Rigorisme I don’t really get a crust vibe at all. Sure it’s hardcore but it’s not really crusty at all. Rather, it sounds like metal-core duking it out with nü-grind in a suburban Quiznos parking lot. I’m not really sure how Quiznos ties in—I was just trying to find something rather normal and widely available to illustrate how disappointingly ordinary this is, and since there a Quiznos all over the place out the suburbs I figured it apropos. There was a band from Minneapolis in the ‘90s kind of like this called Disembodied, except they were about a thousand times better. I suppose this might be comparable to Converge or something these days. Whatever; I’ve been listening to it for a week now and I’m not really feeling it. To be fair though, this sort of ‘core isn’t really my thing.
No comments: 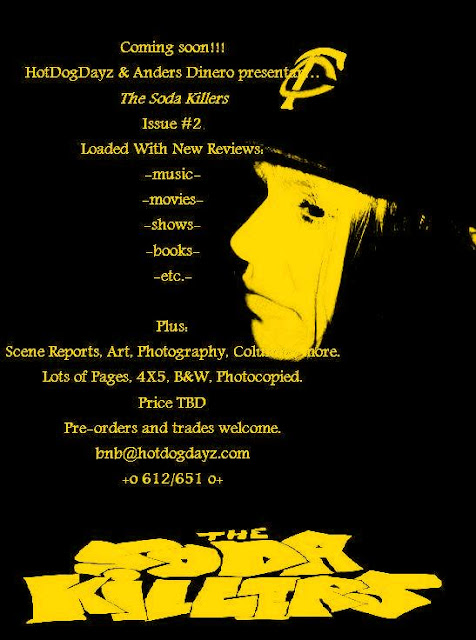 One Minute Reviews
By Nathan G. O'Brien exclusively for HotDogDayz.

Hunting Party-Demo cassette (self-release, 2011)
Hailing from Oakland, CA is the latest entry into the rapidly paced, high turnover rate that is the new Bay Area bands schedule. As is the modus operandi in hardcore, Hunting Party is made up of members from a million other bands—Vacuum, Face The Rail, and Ecoli, to name a few. The tunes are near frenzied but never spinning out of control. It’s good and heavy on the bass and drums, while the guitars keep along nicely; stepping to center stage for a few tics once in a while but never wanking. The vocals are really rad. The singer reminds me of a punkier Matt Pike. Except here it’s gargled, lower pitched, and more prevalent in the mix than High On Fire, and with a hint of nasal discharge. Shaun Dean—of Cold Sweat and Men’s Interest, among others— is another name that comes to mind as far as comparisons go. I realize those are two completely different vocalists, but whatever, I hear both on here. Someone said this reminds them of “‘90s hardcore” or something. When I think of ‘90s hardcore I think of basketball shorts and New Balance running shoes. But this is not that…at all.  Dig it.

To aquire an address where you can send your CDs/tapes/records/videos etc. contact: bnb@hotdogdayz.com
No comments:

Nö Pöwer-Demo 1 cassette (Statue Story)
These guys are from Charlotte, NC or somewhere near there I believe. There are miniscule garage and psych touches but mostly it is raging hardcore punk, with a noticeable emphasis on the noise. So noisy in fact, that I can’t quite determine if it’s supposed to D-beat or not. Who cares either way, because it rules! It reminds me a little of Condominium, but with less prominent bass. The guitars are overblown and the vocals zigzag between depressing and angry and the inexplicable...in a good way. This makes me wish I still had someone to get wasted with at basement shows. The first side is six songs, ranging from a one to two minutes long, while side B is one long jam—roughly four and half minutes of remixed racket, while the band’s name repeatedly shouted atop an inordinate drum beat. I’m so into this. Nö Pöwer released a couple 7”s since this came out but I haven’t heard them yet. I’m sure that if they are as good as this tape, they will be my new favorite thing.

Top 5 Songs Whose Meaning Eluded Us

The Jimi Hendrix Experience-"Purple Haze"
And excerpt from The Set List: Top 5 Songs Whose Meaning Eluded Us
By Nathan G. O'Brien on Scene Point Blank 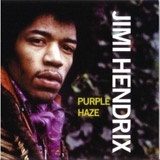 Okay, maybe this one has been done to death, but in 6th grade I really did think he said "Excuse me while I kiss this guy." And it wasn't so much the meaning of that one line that eluded me, as much as it was the whole song. But mostly I just wanted to know what the heck purple haze was.  I liked Prince, but if it was anything like purple rain, that would have only added to my confusion.  I had no idea (and still don't) what that’s all about.  I asked my mother what purple haze was.  She told me it was a Jimi Hendrix song. Ahh, gee mom, thanks for the help.  So I asked my dad one day while we were driving across country.  He had been to Woodstock; certainly he must know.  He replied, "Purple Haze? Ahh, it's an acid rock thing.  You won't understand now, but you will someday."  He paused for a moment, as if having a flashback, and then continued, "It's, you know, really head-y stuff."  And as he said this he lifted one hand from the stearing wheel to the side of his head and made an egg-beater motion. Err, okay?  I eventually moved on to punk rock and rap, and forgot about Hendrix or "Purple Haze" or any "head-y stuff" until several years later.  One night in a nebulous college dorm room with Jimi on the stereo I finally figured it all out.  Ohhh, he's saying “THE SKY," not "this guy." And at that very moment, about an hour into my first experience with a mind-altering acronym—kissing the sky, if you will—I finally figured it all out.  "Purple haze all in my brain..."

See what else made the list after the leap.
No comments: