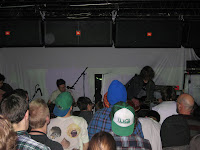 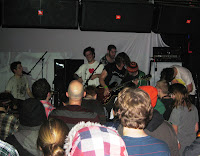 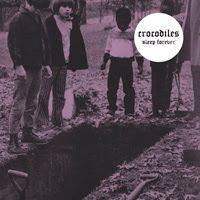 Crocodiles-Sleep Forever-CD- Second go-around for these San Diegans.  Although a slight departure from the previous sort-of-brash and unfinished sound, it is still in line with the dark dream pop 80s meets double aughts bedroom dance resonating on Summer Of Hate. And while not as aural or loud an experience, comparisons to MY BLOODY VALENTINE would not be totally unwarranted.  As well, Sleep Forever fits perfectly alongside other new releases by lo-fi indie contemporaries NO AGE, JAPANTHER and label-mates WAVVES.  Yes, that means the target demographic is most likely the all-encompassing, yet somewhat off-putting H-word.  That is not to say that this is not a good record for old guys like myself, looking to stay relevant and keep abreast of the "new shit."  Of particular interest are the hazy semi-garage rocker, Billy Speed and the closer, All My Hate And My Hexes Are For You.  The latter--which consists primarily of the title being repeated about a million times over an LCD-type beat--is infectious in a simple kind of way, and in my humble opinion, one of the better songs to come out this year.  Pretty good for some dudes from the city whose name means "A Whale's Vagina."-'10, Fat Possum (-NO'B)
5 comments: 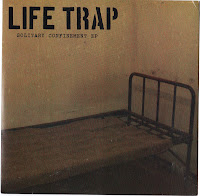 LIFE TRAP-Solitary Confinement-E.P.-7inch-One of the better touring bands to play at Eclipse Records in the last couple years.  Hailing from Tennessee, these guys play ripping hardcore punk.  Like a tiny bit faster AMDI PETERSEN'S ARME' with vocals reminiscent of a slightly less snotty and certainly less irritating QUICNY PUNX.  Short, fast and loud, in the vein of, well, pretty much everyone that plays this stuff.  You know the drill: four dudes in jeans, sleeveless t-shirts and Vans set up on the floor in front of the stage and hammer it out for 15 minutes.  However, these guys stand apart from many of their peers, in that they are extremely tight and oozing genuine energy.  The lyrics--dripping with more f-bombs than an Eddie Murphy stand-up routine from the 80s--are that of the angered-and-disillusioned-bleak-societal-outlook variety, as evidenced by the title track, "The way my life is set up for me is like a fucking trap.  Made one too many mistakes; now there is no turning back.  Caught in fucking cage; my life is like a maze.  Now that I've got nothing to lose, somebody's going to pay."  Similar themes continue throughout, including on the closer, Wasteland, which one can only assume is about their hometown, Nashville, "Why can't you see you're just so full of shit?  Your life's so fucking plastic it makes me fucking sick.  Why can't you see I don't want to live here another day?  Why don't you just fucking go away?!"  Well dudes, although we have our fair share of plastic too, you can always come live here. And play lots of shows.  If records were meth hits, this would be the one that makes your teeth fall out.  A ripper indeed.-'08, No Way (-NO'B)
No comments: 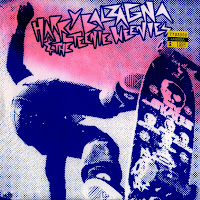 HARRY BALZAGNA & THE TEENIE WEENIES-Skate Army E.P.-7inch- I can't remember if I picked this one out of the West Coast Hardcore or Thrash box(Amoeba Records, L.A.)  Sounds like thrash but they appear to be from Costa Mesa, so I can't be sure.  Either way, that hardly matters now does it.  Crossover thrash ala MUNICIPAL WASTE or CROSS EXAMINATION but with less party & metal and more skate & punk.  Vocals reminiscent of the early DIOS MIO.  Very nicely printed sleeve with the standard old-school skate images; royal blue on white, with a shot of pink aerosol underneath for the D.I.Y. three-color win. The second to last song, Not My Kind Of Fun, is sort of a bummer.  "Was my youth a waste of time?  Cuz I didn't get wasted or fried?  Cuz I didn't find cheap romance or attend one school dance?  Did I miss out?"  Ah, I hate to say it man, but, uhm, well, YEAH!  Just what exactly were you doing?  They are redeemed though because they follow that song up with one about farting in class, called Breakin' Ass.  (Hey, that rhymes.)  Not sure if they are still a band.  If so, hopefully they have dropped the Harry Balzagna part of their name.  Wouldn't want them ending up in the Garage Rock box erroneously.  Seriously though; good shit.-'03, Snack Attack!/The World Is Square (-NO'B)
8 comments: