Happy to announce the release of Soda Killers no.11. Inside you'll find an exclusive interview with Twin Cities graffiti artist ERGOT. (He also did this amazing cover.) We go pretty in-depth and get all interpersonal relations-y. I think graff heads, sociopaths, vandals, and regular people alike will dig it.

There's also an interview with Chicago-based punk trio Boilerman, whom are both great guys and funny guys. Also very serious guys. We talk about things like Taco Bell breakfast, Justin Theroux being the best punk ever, and what it's like living in a world where cops can get away with murder whenever they feel like it.

And rounding out the interviews portion, I have a candid conversation with Cleveland punker (and kinda legend, depending who you ask) Tony Erba about pro-wrestling, his band Fuck You Pay Me, memories of Thrashfest III at Babylon Cafe, and if the well-being of performers matters if the match is good.

There's also awesome contributions from the likes of Clell Miller (Luke Sick), Dan Lactose (DJ Eons One), and Doom Goblin. Clell talks about rap tapes, heady beers, and the Golden State Warriors. Dan recalls his days coming up in the mail-trade world and shares a story of an incident from a Capitalist Casualties show back in the day. Doomy G muses on her oppositional disorder and how it applies specifically to that shitty band Radiohead.

The issue is rounded out by ERGOT graff flicks and a healthy chunk of record & tape reviews.

36 pages cover-to-cover, half-size, photocopied in black & white with some color.

I'm just going to say it: Soda Killers is the best punk, rap, and graffiti magazine on the planet.

GET IT NOW SOLD OUT 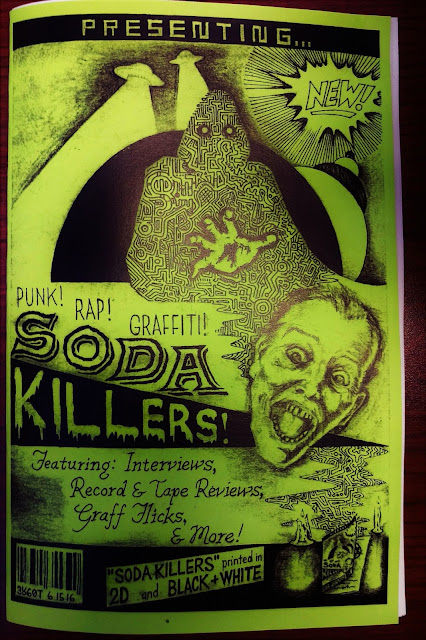 Despite my life being hectic as can be right now, I squeezed in some time to record a new episode. When I'm not spinning new punk and hardcore records and tapes, I work myself into a shoot about using the middle initial in my name, challenge imaginary people to fights, and mispronounce a bunch of Spanish and German band names and songs. I toss in a few wacky numbers from the late -'60s, early-'70s, and early-'80s, and a couple Nick Bockwinkle & Bobby Heenan AWA promos, and bookend it all with some Tragedy the Intelligent Hoodlum tracks. Hit me on Twitter and Instagram at @OMG_NOB and/or email me at thee.n.o.b (at) gmail (dot) com. And please take a moment to check out hotdogdayz.bigcartel, where you'll find zines, mixtapes, tote bags, and bunch of my old cassettes that I'm selling.
-Nathan G. O'Brien

You can subscribe and/or listen in iTunes, GooglePlay, and TuneIn, or get the direct download.
No comments: 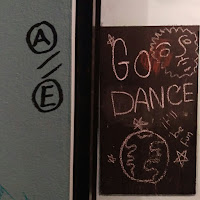 Some weird shit happened here. I could try to explain it but, you gotta ask yourself, do you really care? Yo, just do me a favor and check it out. You'll dig it. Get at me on Twitter and Instagram at @OMG_NOB. Email me at thee.n.o.b at gmail dot com. Procure my zines, mixtapes, tote bags, and more at hotdogdayz.bigcartel.com. Thanks for listening. Peace out!