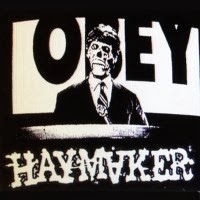 For the first time in nearly a decade Hamilton, Ontario-based hardcore punk antagonists Haymaker have returned to assault undeserving eardrums with a new record. While Haymaker’s members have remained active in the interim in bands like The Swarm, Left For Dead, Chokehold, and Pick Your Side, it hasn’t stifled any of the enthusiasm for the return of these storied shit-starters. Hot off the heels of their now legendary reunion show last month at A389’s tenth anniversary bash—one that included fireworks in the pit and lead vocalist Jeff Beckman calling out bands for being phonies (watch this below) —comes a new 7” titled Let Them Rot.  ...Review continues here.
No comments: 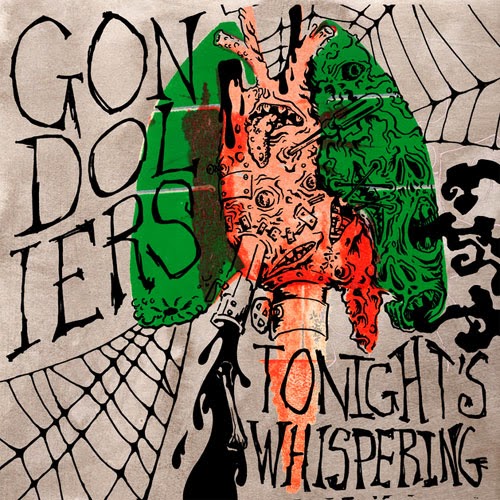 The Boston area trio of noisemakers known as Gondoliers have returned with a new album that dives headlong into their perverse and abnormal world of sound. As a band that’s got a rep for being an amusing live act—playing raucous basement shows, complete with floodlights, hardhats, and flung beer—Tonight’s Whispering shows them trying as best they can to transfer that chaos and disorder to tape. It’s a hailstorm of toxic ether synths, erratic guitar work, and fuzzy yet ever-present vocals...

With songs like “Loose Association” and “Broadcaster,” the fury of psychedelic noise and tension continues. Imagine a house party scene from a cheesy ’80s high school movie — but instead of the band being Wham! or Tears For Fears, it’s Einstürzende Neubauten. Then, imagine DJ Screw and Eerie Von collaborated on a remix of the film’s soundtrack while they were in art school together. Then imagine they used a time machine to send it to Greg Ginn in 1989. Then imagine he put it out on SST as free cassette that came with the Meat Puppets’ Monsters album. If none of this makes any sense to you, then you’re totally getting it.  ...Read entire full-length review after the leap.
No comments: 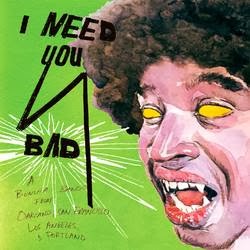 Due to its liberal usage around ye olden music-critiquing biz, “garage rock” is one of those dicey descriptors that, should you choose to follow it, can lead you down a multitude of avenues. It can walk you knowingly into a crotch punching at the hands of the Candy Snatchers, leave you pleasantly surprised and smiling thanks to the likes of Koko Beware, or unexpectedly drop you off smack dab in the middle of downtown Boringsville; which in this case happens to be San Francisco. I Need You Bad is a compilation documenting the present day San Francisco garage rock scene. Curated by one of its most dynamic members, Sonny Smith, it features established bands like Sonny & The Sunsets, The Sandwitches, and Warm Soda alongside a handful of lesser-knowns. Cool idea, but the downside is this is a collection that will send even the most over-caffeinated, coked-up, bicycle cap-wearing scenesters deep into a hibernation-like slumber. Out of the 15 bands compiled here, there’s only four that contribute songs that stand apart from a what is an otherwise completely morose affair.  ...Read full-length review after the jump.
No comments: