The 4onthefloor-4x4(independent)
By Nathan G. O'Brien on Scene Point Blank 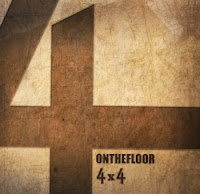 There is a type of rock & roll that is very, well, American—thunderous, hard-driving, electrified rhythm and blues with greasy guitars. Music that evokes a variety of American imagery—an oversized, gas-guzzling pickup truck covered in mud barrels down a gravel road; the driver—sporting a camouflaged hat and a farmer’s tan—rides shotgun with a six pack of beer and an actual shotgun. Or a group of bearded, pot-bellied men on a mid-summer motorcycle run up Route 66—nights spent drinking whiskey and slapping waitresses on the butt in roadhouse bars; mornings at the truck stop, refueling with large plates of biscuits and gravy and pots of black coffee. And my favorite; a couple of heshers working on a rundown car in front of their trailer house—a girl with bad tattoos and Daisy Dukes sits on the steps a few feet away, smoking cigs and hollering out unwarranted advice. You know; hog farmin’, flame-print skull caps, muscle cars, sleeveless tees, choppers, double cheese burgers, leather bikinis, manual transmissions, and suckin’ on chili dogs outside of the Tasty Freeze—the good ‘ole U.S. of A.  ...read entire review after the jump.
4 comments: 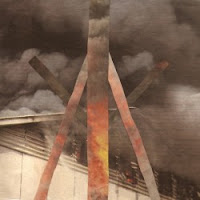 Like any self-respecting, ego-inflated music snob, I hate it when a good band gets huge. And these guys are totally capable blowing the F up.
Iceage pits gothic-tinged post-punk against discordant no-wave with angular hardcore attributes tossed in for good measure. (If you didn’t hate me by now, that sentence should do it for ya.) ...read entire review after the jump.
1 comment: 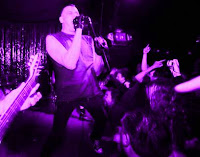 The Dwarves live, Triple Rock Social Club, Mpls, MN, 8/18/11
When Dwarves lead singer Blag Dahlia told the audience at the 3-Rock tonight that, "Rock legends stand among you" I thought to myself, Okay, so he knows the Dirty Biker and I are here, but who else is he talking about?  No, srsly.  After 25 years of pounding laughable statements like, "the Dwarves are the greatest rock & roll band in the world" into the heads of gunk punkers and sleazebags the world over, Blag Jesus' over-inflated ego might actually be justifiable.  Not just because of his relentless dedication to tall tales, bold statements, and songs about sodomy, but because their latest release, The Dwarves Are Born Again (and I know I've been saying this about a lot of records lately) is one of the better albums to come out this year.  And they are backing that up with a great live show, even in the absence of (for the third time in the TC in a row, I might add) the mysterious axe-wielding luchador known as Hewhocannotbenamed.  Also missing was bass player Nick Oliveri AKA Rex Everything.  He's got a good excuse though; he's too busy having standoffs with police and shit.  The set was a mix of classic jams from albums like Sugar Fix, Thank Heaven For Little Girls and The Dwarves Are Good Looking and a healthy dose of stuff from Born Again.  To my surprise and delight they even played a couple from The Dwarves Come Clean, including "There Better Be Women"--a song in which, Blag The Ripper professes, "I don't party with just anyone.  There better be women."  In the bar after the show we would learn that is not just something he wrote a song about.  He had no interest whatsoever in speaking with the dudes that would approach him, but he worked hard, and I do mean hard, at picking up the chicks...young chicks.  In particular, a quartet of crusty bicycle babes sitting next to the Dirty Biker and I.  Anyway, the show was good but I was kind of hoping for some violence.  Not the kind where anyone gets seriously hurt or anything; but you know, maybe some pushing and shoving, someone gets a bloody nose, someone gets thrown out, some broken glass, etc.  In between conversations with our new friend--an energetic barber shop owner from Lakeville--and trying to navigate the drink-getting pecking order of the bar staff, we had good laughs at the expense of the lead singer of Nashville Pussy.  Let me tell you, that dude is pathetic.  Kind of like his band.  Kind of like the opposite of the Dwarves.  Then we drunkenly stumbled down the block to the Cabooze, where we snuck in for the last song of George Clinton and P-Funk.  My gawd, what a bunch of snoozefest going there.  Pretty much exactly like the opposite of the Dwarves.
5 comments: 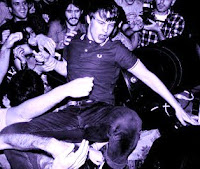 Overall, Iceage is every bit good live as they are on record.  They very well may be "the next big thing."  And if they are, well...I saw them back when...
3 comments:

A little bit more press for Issue #2 of the zine, thanks to zine junkie Randy Spaghetti.  Check it out here:

Thanks Mr. Spaghetti!  Very much appreciated!

We have a very small amount of these left.  If you want one, let us know:  bnb@hotdogdayz.com or thee.n.o.b@gmail.com.  Or, if you want to make a chaitable donation in exchange, simply follow the link on the top right hand side of this here bloooggayah.  Also available for trade.
2 comments: 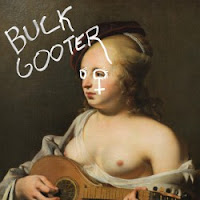 When I think of Devil worship I think of all the scary stuff from my youth. I think of serial killer Richard Ramirez. Also known as “The Night Stalker,” Ramirez is perhaps the most famous Devil worshiper of the era—famous for sporting AC/DC tee shirts, flashing the Devil horns while in handcuffs—a pentagram tattooed on his palm—and quotes like, “I love to kill people.” When I think of Devil worship, I think of King Diamond in Rip Magazine, Anton LaVey and the Church of Satan on the The Geraldo Rivera Show, and finding the remnants of Satanic ritual in the woods behind my house—a candlelit five-pointed star scrawled in ground, the mutilated carcass of a canine, and a forgotten weathered paperback copy of The Necronomicon. Yeah, good old Devil worship and I go way back. ...continue reading review here.
1 comment: