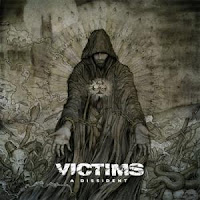 You know how after your favorite bands have been around for a while they eventually make that back-to-our-roots kind of record that reminds you of the fire they once had?  Well this is one of the records that happen before that one.  Existing well past the decade mark, Stockholm,  Sweden’s Victims have been called many things—punk, hardcore, thrash,  d-beat, crust, metal, and…well, you get the picture.  With the release of their fifth full-length album, A Dissident, one could make an argument for the addition of another genre to the list: Pop.

As anyone who has had the pleasure of witnessing Victims play live can tell you, they bring an aural onslaught capable of transforming any dance floor into a whirlwind of flailing bodies and flung beer...  Continue reading here.