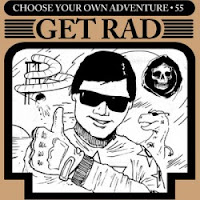 ...Being made of concrete would be kind of be the opposite of rad though, which is weird because rad is kind of exactly what these guys want you to get. I mean it would be cool if you got in a fight or something. Your opponent would have to be made of jackhammer or ten years of bad weather to fuck you up. But if you wanted to cuddle with your sweetie, it would probably be really uncomfortable for them. And as much as fighting rules, cuddling is like, a million times better.  ...read entire review after the jump!