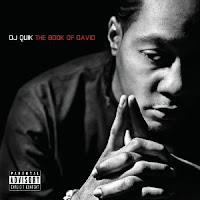 This is the umpteenth release by veteran Westcoast MC and producer DJ Quik. Aside from his underwhelming '09 collabo with Kurupt, I am not familiar with anything he's done since his debut Quik is the Name. That was back when I was a Northwoods wigga obsessed with anything coming out of Compton with a Raiders or Kings cap and a large rope chain.  (Arabian Prince, anyone?)  That being said, he sounds pretty much like I remember him.  His production is super slick G-funk, heavy on keys and bass; and his voice still sounds like an eager youngin'.  Detroit rapper Gift turns in nice guest spots on both "Luv of my Life" and "Hydromatic."  Ice Cube shows up on "Boogie Till You Conk Out", which is nice simply because it is Cube and Quik together in 2011.  "Across the Map", featuring Bizzy Bone and one of the reigning kings of guest-spot appearances-Bun B, is far and away the best song on the album.  It has a heavy synth buzz, over which the Trill OG spits, "I'm rollin' with the homie DJ Quik, and if you don't like that you can suck my DJ dick."  At a whopping seventeen songs, David is way too ambitious. You can easily weed it down to six or seven good ones that you would actually put on your iPod.