The Soda Killers reviewed in MRR

The Soda Killers got "reviewed" by the really nice know-it-all folks at the longest running, no sense of humor-having, punk rock bible Maximum Rock-n-Roll.

Either this gal didn't actually read it, or she's pissed because we covered a bunch of the same records as MRR but did it about a million times better. Or, more than likely, she just hates fun. After reading the other zine reviews she did in the same issue, we're thinking she secretly hates zines too.  Hating zines and fun???  Must suck to be her. 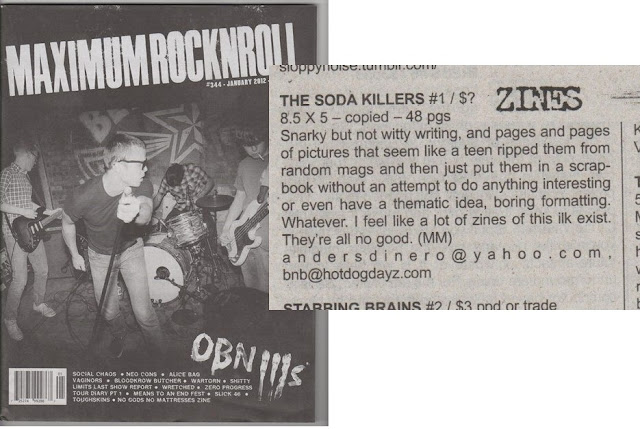 Opinions fucking rule.  Kind of a bummer when someone shits all over your hard work, but that's the breaks when you're putting something out to the universe to be consumed and/or judged.  After all, we are no strangers to ripping shit apart either.  As the old saying goes, what goes around comes around.  Oh well.

If you should still be interested after reading such rave reviews, there are some left.  Contact bnb@hotdogdayz.com or andersdinero@yahoo.com.

PS-For the record, the writing is both snarky AND clever.  And the teen thing; that was the idea, dipshit.