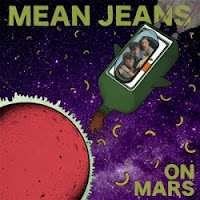 Much in the way Teenage Bottlerocket appropriated the early to mid-‘90s Lookout bands like Screeching Weasel and the Groovie Ghoulies, which were puréeing the Ramones, Beach Boys and macabre cinema, you can’t really credit Portland, OR’s Mean Jeans for bringing anything new to the pop punk landscape whatsoever. In fact, you’d be hard pressed to find a single ounce of originality anywhere on this record. And oddly enough, it’s just that redolent familiarity that makes it so goddamn gratifying. As much as it may bruise my crust-craving ego to admit, I find On Mars to be overwhelmingly adorable. This is punk rock for skater kids, alternateens, and hopeless romantics raised on frozen pizza and gas station nachos, just as much as it for those fending off adulthood; still lurking around the dim corners of fringe society in worn out Chucks and pinned-up hoodies, swilling tall boys of whatever the cheap beer of the moment is, and hipping “the kids” to the days when Danny Panic, B-Face and Danny Vapid were in The Queers instead of, well, whoever is now. ...continue reading after the jizzy.