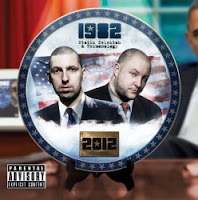 In what makes for a numerically confusing artist/album title (and opening sentence,) 2012 is the new record by 1982—the producer/rapper duo Statik Selektah & Termanology.

At just 30 years old, DJ/Producer Statik Selektah has enough projects under the flattened brim of his New Era cap to have earned veteran status—utilizing his turntablism skills and signature Golden Era-influenced boom-bap production, he holds a spot amongst the current ranks of the East Coast’s more pivotal figures. Over the course of a series of mixtapes and albums, he’s provided beats for some of rap’s highly revered MCs (Nas, Q-Tip, etc.) as well as having a hand in shaping the careers of emerging rappers (Saigon, Freddie Gibbs, Reks, etc.) Aside from a handful of EPs with various artists, 2011 saw him releasing a lofty yet superb solo outing Population Control, and teaming with Action Bronson on Well Done.

Similarly, Termanology has been making a name for himself with a number of well-received singles and mixtapes dating back to the early ‘00s. He was pushed into the underground limelight when Gangstarr’s DJ Premier stuck him with one of his reliable, cut-laden beats for the instant hit, “Watch How It Go Down.” The track earned him some much deserved praise; as he went on to appear in rap magazines like The Source and XXL. Since that time he has ran alongside such go-getters as The Alchemist, Pete Rock, Buckwild, Large Professor, and of course, Statik Selektah. In fact, 2012 marks the fourth time Statik Selektah and Termanology have teamed up under the 1982 moniker.  ...read entire review after da jumpoff.