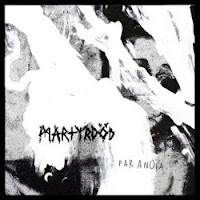 Swedish ragers Martyrdöd, along with Acephalix and fellow countrymen Wolfbrigade, are the latest to be chosen in the great Southern Lord crust roundup. Featuring former and current members of Skitsystem, Agrmonia and others, Martyrdöd have been unleashing their brand of blackened everything to the crust-consuming masses for over a decade now. Their latest offering Paranoia was recorded at Göteborg’s famed Studio Fredman, the studio run by producer Fredrik Nordström and recording home to mediocre metal acts Dimmu Borgir, Arch Enemy, the increasingly less-relevant Opeth, and former luminaries like In Flames and Amon Amarth. Not surprising then, the record has a richer-sounding production value than Martyrdöd’s back catalog of stench on smaller labels like Havoc and Plague Bearer. That is not to say that fans of their mid-century masterwork In Extremis, will feel alienated by this; perhaps just a bit startled at first.

The most notable difference is how the guitars come across really clean. There is still the full-on power and blunt straightforwardness indicative of D-beat but it’s been polished up enough that listeners are allowed to hear the multitude of layers created by skilled axemen Pontus Redig and Mikael Kjellman—incorporating, among other things, aspects of punk, hardcore and classic Swedish death metal. In that same regard, the partition of instrumentation lets the rhythm section make its mark on the overall sound as well. Bassist Anton Grönholm and drummer Jens Bäckelin plod and pound their way through a thunderous Dis-laden low end backdrop. While the guitar work hints at it, it’s really the hateful and tortured vitriol of Kjellman’s vocal styling that adds a heavy dose of black metal to the mix. He furiously spews a poisonous snarl that sounds like he’s been gargling with ammonia and bleach—a distinction that longtime fans will recognize and appreciate. It all makes for a very dark and toxic landscape, in which Martyrdöd ascends the lordship.

Crust, and all that it infects—D-beat, grind, doom, etc.—is often times the amalgamating factor that unites metal heads and punk rockers. By that same token, it’s the quality of the production that can create the dividing line where crust becomes either too metal or too punk. Punk is best served by a raw inflammation of unharnessed potential and noise, whereas metal benefits from attention to detail, subtle nuance and skilful craftsmanship…or something. All that being said, what side of the fence this album lands on is a non sequitur because it has all those effects functioning in accordance—it’s metal, it’s punk, and it’s really fucking good. These Swedes are glistening a little more than usual; but far from being fully sanitized. With Paranoia Martyrdöd makes small strides towards large audience exposure, all the while keeping intact venom and unrefined sonic muscle that placed them atop of the indie crust heap years ago.  ...Continue reading right about here.