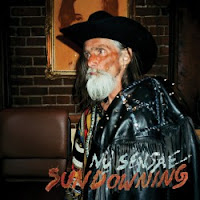 Whether it is rap music, hardcore or pop punk, it seems the ‘90s are forcing their way back into our unsuspecting eardrums thanks to a handful of well-versed history-appreciating up ‘n’ comers. And with that sentiment arrives Sundowning, the second album by Vancouver, BC’s Nü Sensae, a band leading the small charge of current alt-core revivalists. Now a three piece—with addition of guitarist Brody McKnight—the formerly bass and drums only duo pins the snotty punch of classic L7 and Babes in Toyland alongside the auditory ambush of Dinosaur Jr. and the Melvins, while peppering it with Sonic Youth-y and Pixies-ish flirtations. Yes, it’s nearly impossible for anyone who lived through it the first time around to describe the band’s muddy, grunge-nodding brand of punk without playing the “sounds like” game. And that’s in no way a bad thing. Nü Sensae effectively retools the weightiest incisions from that exciting and hopeful era when “college rock” was becoming “alternative” and applies a punky methodology.  ...read rest of review here.