Scene Report: UFC on FX Live at the Target Center 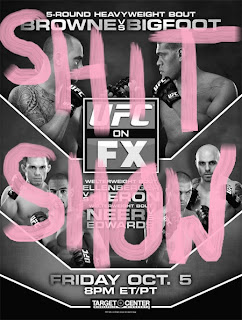 There were a couple reasons I didn't want to go to this show tonight. First of all, it was a total waste of a card. Perhaps I"m spoiled because last time the UFC came through town we had GSP and Brock Lesnar on the card. Even so, I can't imagine anyone would really want to watch this on TV either. That, and I would no doubt end up being seated in front of some arm chair MMA fans (most likely from rural Wisconsin) that feel its their duty to call the fights move-for-move ("Oh half guard...oh, back the full guard...and back to the half guard...oh, almost got full mount.") and announce how they would have scored each round. ("Dude, I had that at a 10-8, bro." "Bro, are you kidding me, dude? That was totally a 10-9 round. He had cage control--come on, bro dude.") Well, I said fuck it and went for it anyway...

I grabbed an $80 ticket from a scalper for $20 and entered just before the main show on FX started. Upper deck was blocked off. Lower deck was three quarters full at best, but probably more like half full. I sat in a section where there were no idiots in front of me or behind me for several rows. They couldn't have made a lot of money on the gate. Dana was papering the show the day before at the weigh-ins, and in the days leading up to it, there were several opportunities to get free tickets around town. Lackluster enthusiasm in general. Lots and lots of booing. Say what you will about booing, but tonight I must admit--and I'm not a fan of booing fights--it seemed totally warranted. Dudes would not engage.  Even with the quick tapout in the first fight and the two knockouts later it's a more or less a shit show--shit card to begin with, followed by shit fights, equals shit show. This is something anyone could have predicted by simply reading the lineup. Lots of grumbling in audience during the whole thing, and especially on the way out. Sounded like people are pretty pissed about paying full price for it.  I would have been too. As unfortunate as it is, really the most exciting fight of the night happened in the crowd during the Ellenberger match in the section I was in. Aside from the fact that a poor gentleman of small stature got beaten bloody by two Jersey Shore-esque steroid monsters--seemingly unprovoked, I might add (wrong place, wrong time for him)--it was more action than anything on the main card. To his credit, Dana White did his best throughout the breaks (which were very, very long) to take photos and shake hands with as many fans as possible. Although it looked at times like he was more interested in chatting with Vikings defensive end Jared Allen than he was watching the fights. Who could blame him? Ronda Rousey was there too.  I'm fairly certain she and Dana are fucking.  You can tell by body language and the way the look at each other.  (If this news breaks, you heard it here first.) Overall, it was a completely underwhelming experience. Even the spectacle of live UFC couldn't save this one. It's really too bad that the UFC is so over-saturated and/or watered down that people don't get excited--even at a live event--for fights that don't feature big names.  Shit was totally lame.