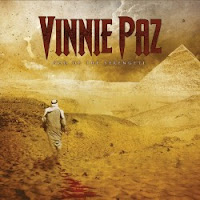 Paz enlisted a number of beat-makers for Serengeti—Havoc, DJ Lethal and C-Lance among them. Things get heated early with a DJ Premier-laced banger, “The Oracle.” Preemo’s hard-knocking boom-bap, turntablism, and sample-based hook provide the platform on which Boxcutter Pazzy spits his signature hard-rhymed lyricism: “My hands are made of stone, cut from that Madusa shit/Big gold chains, we was on that dookie shit/Still roll with the kids I stole the Gucci with/I punch you dead in the face, so fuck the music shit.”