This Beastie Boys Footage Needs To Be Addressed 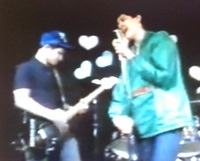 This Beastie Boys Footage Needs To Be Addressed
By Nathan G. O'Brien on Scene Point Blank

“White Shadow” is my goddamn jam! To those that are unfamiliar, The White Shadow was a television program that ran from the late ’70 to the early ‘80s. The basic premise was this: a Caucasian former NBA player takes a basketball coaching job at a predominantly African American and Hispanic high school in South Central Los Angeles, where fairly predictable culture clash-y type things ensue. I was way too young when it originally aired and grew up without TV for a good portion of my youth, so I never got to see that much of it. But one of my fondest memories from childhood is visiting my uncle’s house and staying up all night, lying on the floor in front of a little 9” black and white TV set, watching reruns of The White Shadow on a UHF channel. Anyway, this song is obviously about that show and really important stuff like what time and channel it was on and how it eventually got cancelled, which totally bummed the guys out. To me, this is pretty much the best song ever written.  ...Watch video and read Nathan's entire ridiculously-written commentary here.