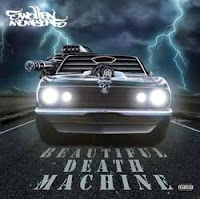 There are times where Rob The Viking lends the sound some elasticity beyond hip-hop, but ultimately they end up being the album’s weakest moments. Initially the dubstep excursion, “Juggernaut” is captivating—especially the breakdown that drops during Madchild’s first verse—but when the hook comes in the novelty begins to wear-off. By the time Madchild hits his second verse, I find myself hitting the FF button. But make no mistake about it; Rob The Vikings is a masterful beatsmith. Songs like “King of Diamonds”, “Mercenary” and “Death Warrant”—complete with sample-based loops and spotless turntablism—are thundering testaments to the lasting power of boom-bap.  ...Read entire reivew at this one place right here.