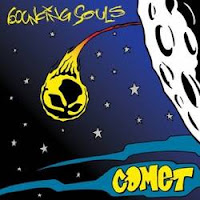 After nearly everyone has finally stopped paying attention, the Bouncing Souls put out a new album.  And holy shit is it ever underwhelming. But you knew that—whether you listened to it or not, you already knew that. If you’re familiar with the band in any capacity whatsoever—whether as a fan or someone that’s merely heard the name before—you knew that. Like Bad Religion, Rancid, NOFX, Pennywise, or other bastions of '90s pop-ish punk, mediocrity is just a given at this point. It’s really unfortunate for us longtime fans that we must now admit to ourselves what our detractors have been saying all along. But before we do that, let’s take a moment to be real with ourselves.  ...review continues here.