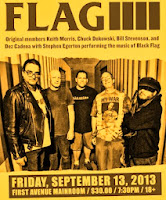 After spending a few hours in a sports bar down the street, where my compadres and I drank numerous tallboys and discussed really important stuff like how in retrospect it was actually a good thing that nu-metal happened because it weeded out a lot of dipshits from the ‘90s punk scene, we stumbled our way into Minneapolis’ legendary rock club, First Avenue for a Friday night rock ‘n’ roll show.

An anticipatory wave began to roll through the audience, as everyone made last ditch efforts to use the bathrooms, grab drinks, and snatch up available sightlines. By my alcohol-clouded estimation, the room wasn’t completely sold out, as it no doubt would have been had Henry Rollins been a part of it. Say what you will about what the man has become, but he would have considerable drawing power over Keith Morris if he were in the same position. That is not intended as a shot at Morris, whom I am a big fan of, but rather a realistic assumption. I couldn’t help but notice and appreciate the surprising lack of smart phone use amongst the crowd. In a strange way this helped convey an overall feeling the we were about to witness something, let’s say, historical, rather than contemporary.  ...read entire review here, including fancy set lists and thinks like that.