Too Many Rappers: Fall Roundup 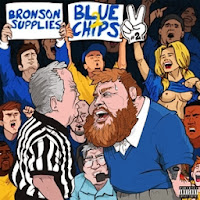 Too Many Rappers: Fall Roundup
By Nathan G. O'Brien on Scene Point Blank

The Minnehaha Creek is just one of the many places I do my thinking. I mean, as a human being with a fully functional brain, I do a lot of thinking in, at, or near a lot of places. It’s not like thinking is something we can control. It just sort of…no, not sort of…it is just something that happens. Anyway, the Minnehaha Creek is one of the places I do my thinking. Like my thinking thinking. Like, purposeful, deep, hard thinking. There are some regular things that I think about when I’m here—things like work, having kids, securing a future, getting healthier, my family, and other, you know, life things. And at this particular time, as I stand in the blackened, whispering wind of a crisp Minneapolis fall evening, overlooking the Minnehaha Creek, I drink a few secret beers, I as I often do here, and think about a variety of things that aren’t necessarily life things but aren’t any less meaningful.

I think about how fucked up it is that the older you get the less likely you are to hang out with your friends, and how not only is it fucked up, as I stated, but also incredibly depressing. The lyrics to LCD Soundsytem’s “All My Friends” keep running through my head, which is puzzling, because I am certain that there are other songs that mean more to me. Yet I keep repeating the lyrics, “Where are your friends tonight?” and “If I could see all of my friends tonight!” And then, for unexplained reasons, I am overwhelmed with the urge to scream, “I felt so fucking alive!” It’s a line that Daniel Roebuck’s character “John” says in in the 1986 teen-angst-murder-coming-of-age-y film Rivers’s Edge. This may seem a bit strange, as I have not (spoiler alert) choked my girlfriend to death. But I’ve seen the movie so many times that it’s sort of ingrained itself into my being at this point. And well, I am standing near a body of moving water too. So there’s that. Then something from my past pops into my head and I immediately send a handful of good friends the following text message:

Sitting here, having some beers Han Solo-style at the Minnehaha Creek and all I can think of is…SHIT YOUR GODDAMN PANTS!

The recipients of this text are the only people in the world that would ever understand it’s meaning, but that’s precisely the point. I laugh out loud, as I think about how great it is that a ridiculous inside joke can be the foundation that lifelong friendships are built upon.  One of them texts back, “Ain’t that the way it goes. Another says, “Just whisper it.” And all is right in the world.

Another beer sinks in, my mind wanders, and I end up spending an excessive amount of time thinking about how it’s been 20 years since the Wu-Tang Clan’s outstanding debut Enter the Wu-Tang Clan: 36 Chambers dropped. “20 years, dudes; 20 years,” I say out loud to nobody whatsoever. I will always feel like I missed out a little bit on the initial excitement because I was so wrapped-up in flannel shirts, Doc Martens, and anything Seattle at the time. My otherwise fierce proclivity for discovering new rap music had briefly taken a back seat to my re-found interest in weird, punk-tinged white people music. Honestly, I didn’t fully engulf myself in 36 Chambers until a year or so after seemingly everyone else had. I think about how I might go to the record store tomorrow—probably the Electric Fetus— and buy 36 Chambers, and how it will most definitely be on CD so I can play it in my car, which I’m not embarrassed to admit still has a bass cannon in the trunk. Oddly enough, the only copy of 36 Chambers that I have is a dubbed cassette that I’ve dragged around with me for roughly 19 years. I’ve never been one to let format be a deciding factor when it comes to personal importance of an album.

I think about how, for better or worse, (and most likely worse,) rap music has changed a lot since the Wu-Tang Clan first hit the scene. I think about how there was once a time when nine guys, or 10 guys if you count Cappadonna, (which I’m inclined not to,) didn’t seem like too many rappers. And then I think to myself, damn, there you have it – that's your Too Many Rappers segue right there…