Record Review: The Instigation - No Way Out 7" 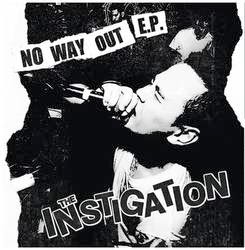 The Instigation - No Way Out 7" (Self-Released)
By Nathan G. O'Brien on Scene Point Blank

I feel like there are a million punk records named No Way Out, but I don’t really care because it’s one of those commonalities that makes punk music, well, punk. And staying within the vein of reiteration, there’s only so many ways to say that a band isn't trying to reinvent the wheel; so I’ll just stick with that old adage here as well. Call me lazy if you will (boring if you must) but the truth is The Instigation are in fact not trying to reinvent the wheel whatsoever; metaphorically, punk rocking-ly, or otherwise. They understand that when a formula works this well, there’s no reason to fuck with it; that formula being the oft-traveled intersection of hardcore and garage punk. Think millennial bands like Social Circkle, Formaldehyde Junkies, or Regulations, and you’re on the right track. This worldly four-piece (having members based in London, Shanghai, and Tokyo) is pure USHC worship; right down to the cover of Reagan Youth’s“Degenerated” that closes out the B side. While that’s as close a surefire way as any to win me over, the other three songs on this 7” are pretty goddamn great too. “No Rules”—which, again, not by any means an original punk song title—is my favorite because of the tremendously simple chorus that goes, “My Life! My Rules! No More Bullshit!”  ...Simultaneously posted here.