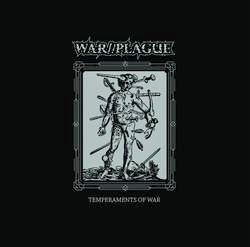 Over the course of their last few records these Minneapolis crust punk stalwarts have really honed their metal chops. I’ll do my best to avoid any “who put their metal in my punk” type of argument and just say, as someone who prefers my metalpunx leaning more to the punk side, I find Temperaments of War a little less intriguing than any of their previous releases. Aside from a few subtleties they’ve gone pretty much full-on metal this time around.

Their evolution into metal shouldn’t come as a surprise to anyone that’s followed WAR//PLAGUE’s string of releases thus far. They have largely eschewed the mucky subterranean type of crust (a style that fellow Minneapoltans Kontrasekt do very well) in favor of masterful instrumentation, decipherable vocals, and clean production. That is to say they’re more “punk” in their approach and application (and lifestyle no doubt) than they are in their sound. And this time around they’ve got a really big sound that, sonically speaking, is more fitting for larger stages than tiny basements.  ...read entire review here.