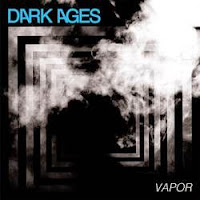 “You have been wasted. You have been taken for a ride.” That line from the title track of the new Dark Ages LP accurately sums up the feeling you get listening to it. Which is to say it’s difficult to compartmentalize exactly what’s going on here. (Not surprisingly there’s a number of bands named Dark Ages. We’re talking about the one from Kansas City, MO that features drummer Jason Shrout—formerly of 18 Visions, Trial, and Renouncer—and is often referred to as “hardcore punk.”) Yes, in the simplest of terms Vapor is a hardcore punk record. But there’s a lot of manic directional changes taking place within’ these songs that will catch you off-guard and leave you slightly bewildered. These musical gradations lend a math rock, prog-y vibe; not in an eye-rolling, groan-inducing way though; rather an incoherent way fitting for hardcore. You're rarely allowed the comfort of settling into a groove. And the analog recording adds an element of richness to the overall tone. As the cliché goes, this is hardcore being pushed into yet another new direction. For real this time though. In summation there are three things I can say about this record with absolute certainty: It’s confusing, it’s good, and it’s confusingly good. Layout and art-wise, Vapor is another impressive package from the Sorry State camp. For the collectors there’s 100 copies on black & blue swirl vinyl out there. And for the rest of us there's regular old black. Go get 'em.