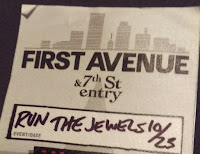 “I’ll apologize now. If you are wearing glasses, you might want to put those away. If you hate being slammed into by people, you might want to make your way to the back. If you’re rocking brand new sneakers, I’m sorry. I’ve been there. I understand. But you’ve been warned. I’m sorry in advance about your new shoes.”

The speaker is El-P. He and his partner in rhyme Killer Mike are known as Run The Jewels. Maybe you’ve heard of them. No doubt a result of their relentless tour schedule—this being their fifth appearance in the Twin Cities alone in just three years—Run The Jewels have mastered the art of house-rocking. We’re midway through their headlining set at a sold-out First Avenue, where they’ll give this seemingly honest and understanding forewarning just a moment to sink in before Zach de la Rocha’s sampled machinegun-fast vocals crack from the speakers, signifying the arrival of “Close Your Eyes (and Count to Fuck)." “Run them jewels fast, run them jewels fast, run them, run them, run them…fuck the slow-mo...”

And then it happens.

Trackstar The DJ drops the beat and the audience explodes into a frenzy of neck-snapping, pogoing, fake gun-in-the-air-firing, fist-pumping lunacy…again. This is how it’s been since they took the stage. You wouldn’t think it could any crazier, any sweatier, or any OMG-ier. But it does.

Louder than fuck and with enough sub-rattling oompf to run a nuclear reactor, RTJ perform on this night—the second to last of their current tour—as if they are auditioning for their first record deal. Keeping the eager crowd enthusiastic for an hour plus in stifling heat, the duo themselves are intense and furious and restless and command the proceedings instinctively; reaffirming that they are thee force to be reckoned with in the hip-hip pantheon.

The openers Fashawn and Boots fill their roles adequately. The former, clearly understanding the importance of high spots, brings locals Prof and Brother Ali on for one song each. Meanwhile the latter’s The Weekend meets Nine Inch Nails gimmickry (about all the was missing was a bunch of mud and keyboards on boomerang stands) seems a tad out of place, but provides ample time to hit the bathrooms and grab last-minute drinks. And oh boy, the drinks are being had tonight.

RTJ enter the stage as they always do: with Queen’s “We Are the Champions” playing over the PA. They seize control immediately, doing “Run The Jewels”, and then “Oh My Darling Don’t Cry”, and later “Blockbuster Night, Part 1” and “Banana Clipper.” They bark out lyrics like Southern gospel preachers while Trackstar The DJ works the decks, providing a hard-thumping backbone and flexing his turntable dexterity.

Following “Love Again (Akinyele Back)”, the track with the famed hook “She wants this dick in her mouth all day”, El-P and Killer Mike spend an inordinate amount of time trying to drive home the point that it’s not the misogynistic sex rap it’s been mistaken for. “That’s the stupidest lyric for a love song we ever wrote” says El-P. Killer Mike adds, “But don’t get it twisted; it’s a love song. And if Gangsta Boo was here she’d tell you the same thing.”

Okay guys, whatever you say.

The set, which by my estimation contains just about every RTJ song there is—including “Lie, Cheat, Steal”, “Pew, Pew, Pew”, and “All Due Respect”—closes out with a rousing rendition of “A Christmas Fucking Miracle.” And when all is said and done, the crowd is left swaying in their own sweaty puddles, kind of drunk, and in complete awe.

“Dude, that was so awesome. My brand new Jordan’s are fucked. But I can’t wait to see these guys again.”

The speaker is my friend; a young Nebraskan transplant who has just witnessed his first rap show.