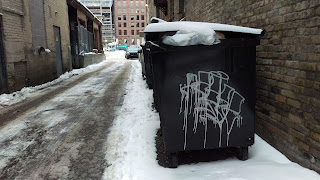 I'm not going to lie, when it comes to rap music, I'm getting old. Don't get me wrong, I'm not stuck in the past—I keep up on the new shit—but variance-wise, I'm not exactly trying to expand my horizons anymore. I prefer the type of rap that doesn't stray far from the original blueprint; birthed in the late '70s, developed throughout the '80s, and damn-near perfected in the '90s. That is: dope beats, hard rhymes, and cuts. I've said it before and I'll say it again: call me a grumpy curmudgeon if you must, but do so knowing that are very few things that I'm as passionate about as rap music. My approach to hip-hop is the same as that of a big man holding down the lane on a basketball court: Don't Bring That Weak Shit In Here. So, with that, here's my favorite rap music from the past 12 months...

Action Bronson - Mr. Wonderful (Atlantic)
This is Bronson’s—the former sous chef turned rapper—most eclectic release to date. Sure, the pimp hand and pop-culture-laden rhymes are there, but the song writing is more focused and the production is diverse; including beats from the likes of longtime collaborators Statik Selektah, Alchemist, and Party Supplies, as well as Mark Ronson and 88 Keys.

Apollo Brown - Grandeur (Mello Music Group)
All the signature dusty soul loops you’ve come to expect from this beast behind the boards, and with a bevy of lyricists in tow; among them are Evidence, Vinnie Paz, Your Old Droog, and the recently deceased Sean Price. Building upon the foundation laid by Pete Rock, Preemo, and Large Pro, Brown is without a doubt in the upper echelon of current beat-makers.

DJ EFN - Another Time (Crazy Hood Productions)
Miami mixtape maestro DJ EFN's latest features hand-picked production from nine different producers and over 60 rappers. It' on some cypher outside the corner store, beats blasting from a Jeep nearby, rockin' baggy sweats and cigarillos-type shit.

Gangrene (Alechemist & Oh-No) - You Disgust Me (Mass Appeal)
As usual these two producers-come-rappers are on the blunted, LSD-soaked, heady tip. Not the most dexterous emcees but they do enough to get by, and bring in heavyweights like Sean Price, Havoc, and Action Bronson to fill in the gaps. Their production is the real star here; mucky psychedelic beats enhanced by dusty movies samples and other scary as fuck noises.

Ghostface Killah & Adrian Younge - Twelve Reasons to Die II (Linear Labs)
The sequel to their 2013 project, this round is noticeably more focused on the storytelling front. It features narration from RZA as well as numerous appearances via Raekwon. Younge turns in another striking soundtrack, furthering an impressive string that includes the first Twelve Reasons and the 2014 Souls of Mischief album The Future is Now.

Freddie Gibbs - Shadow of a Doubt (ESGN)
Gangster Gibbs could easily rest on his laurels at this point in the game; especially coming off of two excellent records last year in Piñata and The Tonite Show, his collaborations with Madlib and The World’s Freshest respectively, but instead he continues to challenge himself creatively and emotionally. The result is sonically varied album—bumping, moody, subbed-out—that further displays his versatility - a street hustler, a gangster rapper, a crooner, a showman, an artist.

Git Beats & Bob Banner - Get Mad, Turn Green EP (Usedwax)
An under the radar yet wholly enjoyable EP via the New York duo Git Beats and the mysterious Bob Banner. If it wasn’t for the Sean Price’s appearance on a pair of tracks, it’s unlikely this would have ever made the blog rounds. Let’s be thankful it did. Banner’s got that rugged, cotton balls in his mouth vocal affection, which goes well with Git’s hard-thumping boom-bap.

Grand Invincible - Menace Mode (Megakut)
This very well could be the best work from both of these dudes to date. Luke Sick’s lyricism and delivery is wholly realized. He comes straight gully, spitting mean-mugged, blunted rhymes; ripe with clever wordplay and cultural references that will have you hitting the rewind button like, hold up, what’d he say? And DJ Eons One has fully arrived; a master craftsman when it comes to production. His vinyl-culled beats are so vintage in sound you can practically hear him blowing the dust of the records. Smudgy, horn-filled loops and hard drums, accented by ill audio ephemera samples and inspired scratching results in a boom-bap odyssey-like soundscape. And on cassette too.

Malik B & Mr. Green - Unpredictable (Enemy Soil)
Classic sounding boom-bap from the East Coast. All raps by Malik B, who was in the Roots all those years ago. He’s still bringing that live-from-the-streets vibe too. Beats and cuts by Mr. Green, whose got nimble fingers on the cross fade and a knack for hard drums.

Paul Nice & Phil Most Chill - Fabreeze Brothers (AE Productions)
This is on that throwback tip, undeniably. Apart from one another these two have been in the game for a minute, so it’s no surprise that this new joint—their long-awaited collaboration—has that crate-digging, break-beat, verbal deftness sense that recalls the early-to-mid-‘80s days in hip-hop development. It’s not archaic, rather archetypal. And holy shit is ever refreshing.

Ratking - 700 Fill EP (XL Recordings)
On the heels of a brutally cold winter this New York trio dropped a free EP named after the famed North Face winter jacket model. Nine tracks recorded in as many days, which lend it a unique and improvisational ambiance. Sporting Life’s beats—post-trap, maybe, or rather, probably—compliment emcee’s Hak’s aloofness and Wiki’s nasally, battle-ready exorcisms.

Starvin B - The Foreigner (Sickside)
Another low-flying release that caught some attention due to a Sean Price guest spot. '90s East Coast boom-bap worship up and down. Starvin B spits all rugged and raw like over some hard-ass bap and dope cuts. Heavy-bumping beats, record scratching, and skilled lyricism like this will always trump other variants of hip-hop.

Westside Gunn & Conway - Griselda Ghost EP (Big Ghost Ltd.)
Gunn and Conway on the mics, Big Ghost on the beats; flexing that grimy ‘90s-style muscle. I could continue to describe this but I wouldn’t do it the justice it deserves; so here’s Big Ghost in his own words: “We’re trying restore the feeling of when you could throw a record on and let that shit play all the way through...no skips...and get lost in some fly shit. If you can remember what it was like hearing The Infamous or The Purple Tape the first time… This is from that essence... The smell of blunt ashes and broken Heineken bottles on the corner at 5:00 am. This is that Carharrt dungarees and razorblades under the tongue shit. This is that pissy project hallways shit.”