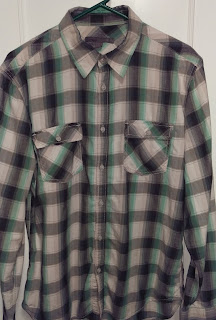 1. The Travel Flannel (Mint, Grey & White Plaid)
One of those modern plaid designs that's hard to describe; it's a tartan/madras/checked hybrid that was probably designed by a computer.

I picked this up several years ago during the flannel revival of 2007 or '08. I can't remember the price but I got it at Old Navy so it couldn't have been that much. It's got a slight glue stain on it from an art project and is shredding around the collar but it's still easily my favorite flannel shirt.

I was wearing this at a Condominium show at Extreme Noise and a women came up to me and was like, "hey look, matchy-matchy" and pointed at a guy across the room who was, much to my dismay, wearing the same shirt. I thought about murdering him and then burying his body out back under the guise of night but instead chose to smile and pretend it was no big deal.

I've since named this my travel flannel, as I always wear it or at the very least have it in my carry-on when traveling. 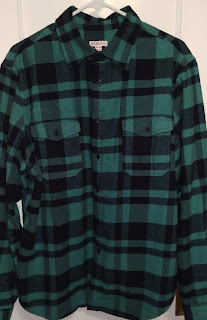 2. The Christmas Gift Flannel (Teal & Navy Plaid)
A recent entry that has moved up the list quickly. A 2015 Christmas gift from my wife. Pretty sure she got it at Target because the brand is Merona and because when we were at Target the week before I pointed at it and said, "You can get me that for Christmas."

Normally I'm not the biggest fan of multi-sized checks when there's only two colors. However, I am very fond of this particular one because I wore it for the rest of Christmas day and a couple times since and have recieved several compliments. Plus it's hella warm. Thanks wife and Target. 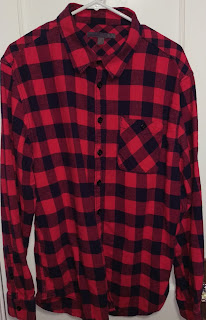 3. The Lumberjack Flannel (Red & Black Buffalo Plaid)
Often referred to by assholes as the "Paul Bunyan flannel" the buffalo plaid design is a timeless classic dating back to 1850, when Woolrich Woolen Mills started making them.

Once popular amongst the forest-clear-cutting loggers that inhabit small towns in Northern Minnesota (even they’ve switched to Under Armor base layers and polar fleece now) its now recognized as a staple of city-dwelling lumbersexuals; often appearing alongside a large pube-y beard, a $60 haircut, spotless selvage denim, never before worked-in Redwing boots, and whatever the hip craft beer of the moment is.

I got mine on clearance for $4 at Old Navy in probably 2008 or ‘09. I actually like it a lot but rarely wear it outside of the house because I got tired of strangers asking me what my favorite Mumford & Sons song is. 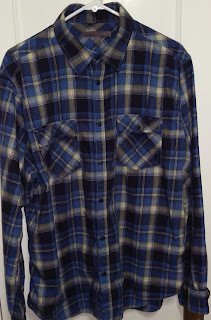 4. The Just a Regular Flannel Flannel (Blue, Black, White & Yellow Plaid)
Same model as the travel flannel, although I don't like it nearly as much.  Darker colors contrast with thinner lighter collors, making it an obvious albeit uninspired tartan pattern.

I once rolled this into a ball and used it for a pillow when I spent the night under a bridge after drinking 21 cans of Black Label. Other than that there’s absolutely nothing extraordinary about this flannel whatsoever. It's just a regular flannel. 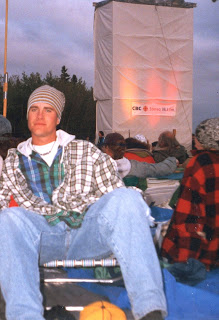 5. The '90s Hooded Flannel (Blue, Green, Black & White Plaid w/Sweatshirt Hood)
I don’t have this one anymore but I look back on it fondly and often. I Bought it at a now-defunct store called Hal’s. Hal’s was chain that was in shopping malls across Northern Minnesota; memorably in Iron Range towns like Grand Rapids, Virginia, and Hibbing. They sold dirt cheap college team gear, Union Bay and Bugle Boy jeans, Stussy, pre-Target brand Mossimo, Body Glove, and other staples of ‘90s youth fashion. They also sold off-brand affordable items from the revolving door of hot trends. There was a Hal's in the Bemidji mall, which is where I got this.

It was during the height of the '90s flannel boom when everyone was trying to cash in on the grunge wave. So when my friend Matt and I saw this we rolled our eyes and laughed at the absurd idea of sewing a sweatshirt hood onto a flannel. (Of course these things are ubiquitous now but back then it seemed like the stupidest thing ever.) I bought it as a gag but it didn’t take long for it to become my favorite flannel. As seen in the photo, I even wore it with other flannels. Matt would laugh at me every time I hee saw me in it and I felt a little like a sell-out but I couldn't help myself.

Eventually all but two buttons fell off and the hood began to detach. Everyone was ditching their flannels for a bit there, and so did I. Like the '90s, it's gone but not forgotten.