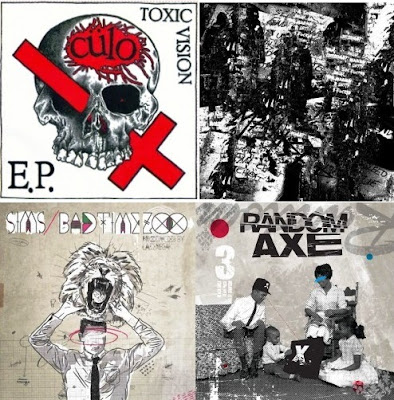 Beastie Boys-Hot Sauce Committee Part Two
Old-School hip-hop…scratch that, rap music resurfacing at a time when contemporary hip-hop is in dire need of actual rappers. Complete with all the obscure cultural references (Kenny Rogers Roasters, André Leon Telly, Jerome Crooks, Splenda, etc.) and witty humor you’ve come to expect from the Beasties. Sample Adrock lyric—“The proof is in the pudding/And the pudding is in my pants/You’ve heard me rap/Now watch me dance.”

Mauser-End Of The Line
Out of Gainsville, FL comes a band of punks whom seem hellbent on injecting a much needed shot of adrenaline into D-beat. This 7”—a superbly executed raw and noisy affair—affirms there is still plenty of originality left in the genre. That being said; those who fell in love with the self-titled EP by Japan’s Mörpheme would be equally as enamored with this record.

Sims-Bad Time Zoo
More than a half-decade since the release of his debut album, the veteran Minneapolis MC returns with venomous tongue-lashings directed at both the over-caffeinated, plugged-in, self-serving masses and the man in the mirror—all laid upon some of the most innovative and hard-hitting beats this side of the Mississippi, courtesy of fellow Doomtree member, Lazerbeak.

Random Axe-Random Axe
A project several years in the making Random Axe finally surfaces to much deserved fanfare. Random Axe is an all-star trio consisting of Guilty Simpson, Sean Price and Black Milk—three men who have earned their stripes in the fiercely independent hip-hop underworld. On their self-titled debut Simpson and Price lay down verses of gritty street life on top of Milk’s electrified boom-bap—resulting in a product worthy of the anticipatory timline.