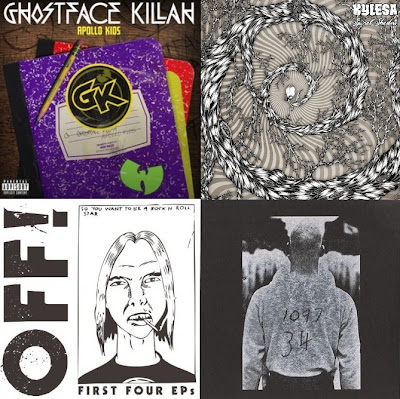 Ghostface Killah-Apollo Kids
Dropping in right at the end of the year (released on 12/21), Ghost returns with an album of bangers not heard since 2006's Fishscale—gritty, graphic, passionate, and, well, real. Guest spots from a bevy of storytellers, including Busta Rhymes, The Game, Redman, and fellow Wu members and affiliates, matched with soul and funk-sampling production from the likes of Jake One, Yakub, Pete Rock and others make for an undeniably true hip-hop album. Standout tracks are “In the Park”—a back-in-the-day jam that features the Roots’ Black Thought spitting rhymes harder than you’d think he’s capable of—and “How You Like Me Baby”—which has one of the best Ghost choruses since Fishscale’s “Be Easy.”

Kylesa-Spiral Shadow
Another late year release (10/25); Spiral Shadow shows Kylesa picking up where they left off on Static Tensions—continuing to shed the crust-tinged edges of their past; delving further into progressive and psychedelic areas. This is the third and cleanest-sounding Kylesa record that has been produced in-house by guitarist Phillip Cope. While an emphasis on flawless production often times produces disappointing results in the world of sludge and doom, it’s a totally natural progression for Kylesa. And if you have any doubts as to whether they can still bring the lumber, one listen to this record will prove otherwise. Aside from including Kylesa’s most palatable song to date— “Don’t Look Back”—Spiral Shadow is quite the thunderous project; thanks in large part to the dual drum attack of Carl McGinley and Tyler Newberry.

Men’s Interest-More War
Shaun Dean, of Cold Sweat and Repercussions fame, returns fronting a new band—the menacing Men’s Interest. More War is somewhat mysterious, as there are no song titles—just numbers, and very little information other than the name of the band and the title of the record. Dean’s vocals are more penetrating and maniacal than ever before—imagine GG Allin and H.R. tongue-kissing each other, with melted cheese stuck in their throats. If that description makes you feel queasy you might want to take an antacid before listening to the record because it doesn’t get any less forbidding. More War is seven songs of raw, noisy hardcore that will leave you feeling sketched out yet yearning for more—the vinyl equivalent of methamphetamine.

OFF!-First Four EPs
A hardcore punk rock supergroup of sorts, OFF! Features members of Red Kross, Burning Brides and Rocket From The Crypt, fronted by former Black Flag/Circle Jerks front man and current punk historian/know-it-all, Keith Morris. With no song clocking over the minute and a half mark, Morris has never sounded more urgent, and dare I say, youthful. The production of these songs strikes a perfect balance between old and new—the guitars are clean and loud, but Morris’ vocals are allowed to crack and pop the microphone in a way that recalls the raw energy of early Black Flag. First Four EPs is just that—a collection of four different EPs. They come nicely packaged, complete with artwork courtesy of Raymond Pettibone, who is responsible for creating much of the iconic imagery of the era of hardcore that the members of OFF! first cut their chops in.

Unperson-Demo
Out of Boston, MA comes yet another bad-ass hardcore band. Short, fast, loud, heavy, raw, noisy, ripping, raging, yada-yada, you know the drill—there are only so many ways to describe this stuff; all of them fitting for this six-song demo by Unperson. Their tunes are quick, fevering jaunts, done in less than a minute, with vocals that are more shouty than they are screamy. Think female-fronted Capitalist Casualties or Dropdead. If you look up “hardcore demo tape” in the encyclopedia, you’d find this. By the time you read this Unperson may have disbanded. But fret not; Krystina and another member are in a band called Curmudgeon, which is in the same vein, and have already released a demo.

Please continue to Scene Point Blank to read the rest of our 2011 Mid-Year Review feature.