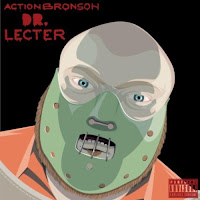 Action Bronson-Dr. Lecter
I must admit I'm late as hell on Action Bronson.  I don't recall exactly the first time I heard about him, but I didn't check it for reals until I read that Mr. Muthafuckin' eXquire considers him a contemporary.  Action has since quickly become one of my favorite MCs.  While his cadence is oddly familiar to that of a one Ghostface Killa, skills-wize I would argue that he is actually superior. He moves effortlessly through a variety (albeit a small scope) of subject matter (some of which, just happen to be my favorite things)--pro-wrestling, weed-smoking, sports, the streets, and food.  Hella, hella food.  Dude makes me straight hungry.  I highly recommend Dr. Lecter...unless you're on a diet.  On "Ronnie Coleman" he addresses his obvious (over) eating disorder, "Lock the refrigerator/there's no controlling me/steak and chocolate got their motherfucking hold on me."  And he's got punchlines galore.  Example: "Never mess with the blanco/and that's word to O.J.'s Bronco."  Producer Tommy Mass--who is known mostly for his work with hipster-hoppers Team Facelift--created a backdrop consisting primarily of breakbeat loops.  It's a very 90's New York vibe going on here.  Usually I don't like it when rappers release multiple records in a year but I'm looking forward to seeing how this holds against Bronson's upcoming collabo album with Statik Selektah later this month.  (Ed Note: it drops tomorrow!)