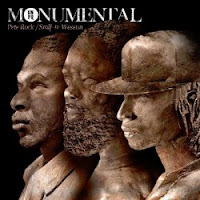 Monumental is, in a larger sense, a tribute to a true craft. Hip-hop has existed in some form or another for nearly forty years now. But the era that true heads speak most fondly of is the mid ‘80s to the mid ‘90s. The Golden Age, if you will, was perhaps the most important time in the development of hip-hop. The ‘80s were about exploration and diversity, and the ‘90s…well, shit just got hard. Sure hip-hop has made strong moves in terms of popularity in the ‘00s and the ‘00-teens, but the focus has shifted from being skill-driven to more personality-driven. So it’s exciting when an album like Monumental comes along that celebrates the original aesthetic of hip-hop laid forth in those early years.  ...Read entire review after the jump.