The Descendents - "Weinerschnitzel"
An excerpt from The Set List: Top 5 Songs Under 30 Seconds
by Nathan G. O'Brien on Scene Point Blank 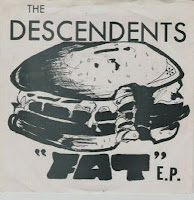 In 1981 The Decendents steamrolled punk rock angst and childish humor into a SoCal pinner doobie and hot-boxed it with disenfranchised teenagers everywhere. Perhaps no song in history quickly, yet accurately sums up youthful suburban boredom as well as “Weinershchnitzel” does. The Fat EP—which clocks in roughly as long as it takes to hot-box an actual pinner doobie (four and half minutes...so I'm told) features other short but awesome songs like “My Dad Sucks”’ and “I like Food.” But “Weinerschnitzel” is not only the quickest; it’s the greatest—glorious in its simplicity. “Welcome to Der Weiner Schnitzel. May I take your order please? Yeah, I want two large Cokes, two large fries, chilli-cheese dog, large Dr. Pepper, Super Deluxe with cheese and tomato! You want Bill sperm with that? NO!" Ten seconds later you’re asking yourself three questions: A) Why is everyone yelling? B) Is it over? And C) Wait, did he really just say “Bill sperm?”

See what else made the list after the jump.