One Minute Reviews: The Sensitive Side-Demo 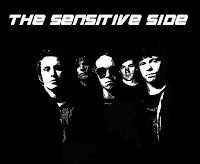 The Sensitive Side play snottified garage punk with a touch of ye olden ‘60s style Brit Invasion tossed in. Imagine The Reatards if they were mentored by Billy Childish and only allowed to listen to new wave records once a month. I’m thinking leather jackets, black hair, and bright colored—probably striped—tee shirts. The keyboards—while ear-piercing and amateurish—remind me a little of the Murder City Devils. With subject matter like friendless lost summers and reading on the toilet, it’s probably safe to assume these guys are teenagers. If not, then their adults capitalizing on the opportunity to act like teenagers that punk rock so graciously affords us. Being that this is a demo, it has an under-produced quality to it, which is actually quite enduring and is complimentary to the overall feel. With repeated plays, this has really grown on me, which is something I didn’t initially expect. I believe these are exactly the same songs on the Moon Kids 7” that came recently out on Vinyl Dog. I imagine rock-n-roll fans would be happy with either. I wouldn’t be surprised to see these guys getting signed to In The Red, Goner, or, like, HoZac or something. Yeah, definitely HoZac.