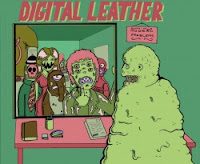 On one hand, Modern Problems is an oddly appealing record, loosely rooted in ‘80s-esque new wave and goth. Amass with catchy hooks and trappings of what was once long ago referred to as “college rock,” it comfortably holds a place alongside the familiarity of Hughes’ movie soundtracks, Joy Division, and even the lo-fidelity alt-punk of early R.E.M.  Without knowing what the intention behind Modern Problems is, it makes it is difficult to perceive it in an easily understandable way. But then again, that’s precisely the type of thing that makes good art. ...Read entire review after jumping off the bridge.