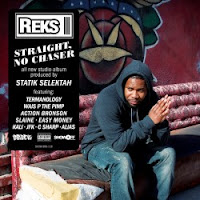 Where Reks’ previous albums have featured beats from a variety of producers—DJ Premier, Pete Rock, Large Professor, Alchemist, Hi-Tek, etc.—Straight, No Chaser’s weakest point comes as a result of the singularity in production. Having saturated the market with an impressive grip of projects with other MCs in the last couple years—Action Bronson, Terminology, Freddie Gibbs, to name a few—it’s not surprising that there are moments here that indicate Statik Selektah may be set on autopilot. The whole thing loses some serious steam about two thirds the ways in. In fact, it’s hard to tell if Statik just took a timeout or hit the wall completely. Being a long-time collaborator with Reks and even the godfather of one of his children, it’s hard to imagine Statik just gathering a bunch of throw-away or rejected beats from some of his other projects for this album, yet it does seem only half-motivated. Lyrically, Reks spans a variety of autobiographical-slanted themes in an honest manner in which the title implies. Straight, No Chaser is a personal reflection on a number topics such as political upheaval and empowerment, Capital Vices, divorce, and living with regret. On “Parenthood”—wherein the message is simple: “be a parent in the hood”—he goes at fathers who are continuing the succession of leading their sons into street life: “A boy needs a father to lean on/If he gone, the cycle gonna repeat/Just keepin’ On.” In short, despite some lackluster production, this is Reks most grown-up and progressive outing to date. ...read full review right about here.