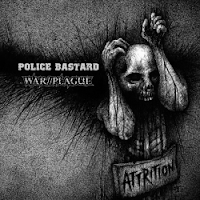 Attrition brings together two punk bands from opposing sides of the Atlantic Ocean—England’s Police Bastard and the United State’s WAR//PLAGUE. Most of the material was recorded at various points in 2009 but not released on vinyl until May of 2011, when Profane Existence Records pressed up a couple thousand slabs of wax to unleash to patched-up masses.

WAR//PLAGUE is from Minneapolis, MN and is made up of veterans of that scene—members having previously played in bands like Pontius Pilate, Provoked and Scorned, among others. It’s hard to pinpoint their sound exactly, as they swim in the coagulated genre scum pond that is modern day crust, but also do a fragment of D-beat the way it was done in the ‘80s and ‘90s—the guitars are lower in the mix but not buried, and the vocals, while gruff, are clear enough that you can understand the lyrics.  ...read full-length review at this place.