Memory Lanes Block Party, Punk Night, Mpls, MN, 5/25/12
Things got off to an early start on the bigger stage with ska-punkers Rocksteady Breakfast. Yes, you heard that right: in the year 2012 AD, there is still such a thing as ska-punk. And the band is not made up of junior high kids like you'd expect. Yawn. Pretty sweet street-punk looking crew though. Lots of attention to detail when it comes to their, ah, outfits.

Brain Tumors, one of the bands that will be on the HDD All-City First Team of Punk, played next on the tent stage.  (They will be #2, 3, 4, or 5, but not #1.  That spot belongs to Condominium.  We'll be addressing our first and second teams in upcoming posts.)  The lead singer Drew is a maniac; a drunken maniac.  He comes from the school of thought that hardcore is supposed to be violent and confrontational and he does it really well.  He was bleeding from his lip, forehead and arm by the time the first song ended.  He actually punched me in my eye at one point.  They were as impressive as ever.

Children of Euler were next up on the big stage.  They play some technical, prog-ish black metal type of thing.  I dig it sorta.  Pretty sure I’ve seen them before but I can’t remember where.  There was lots of mathematical and scientific kind of chatter between songs.  Someone told me they are all really smart math dudes and that the lead singer even teaches math somewhere.  I cannot confirm that; it's just something some drunken chick with Addicts, Misfits and Subhumans patches said to me.  I'm pretty much over anyone that is still wearing any of those patches when they are legal drinking age.  Those patches are for the young'ns who are just getting into punk.  Once you can legally buy booze for yourself, you should get into D-beat or crust or something.  You’re like, old and shit.  Speaking of young'ns wearing patches, I will never get over kids wearing any patches of any punk band ever.  That shit is the bomb, and makes me smile and/or tear up every time I see it.  What can I say; I'm a sentimental wreck when it comes to this shit.

Back on the small stage was Chicago hardcore ragers Manipulation.  Pretty fucking rad, but dude's mic cord wasn't as long as Drew's, so he couldn't be as in-your-face as Brain Tumors was.  Not that they didn't give it their best shot though.  I dug it for sure. I also started drinking at this point, as I was tired of waiting for Lars the Heathen to get there.  I went to take a piss after Manipulation was done, and literally five seconds after I stepped in the honey bucket, a dude started pounding on the door and screaming at me for being in there too long.  I finished pissing and waited for him to hit the door again.  Then just as he did, I kicked that motherfucker open as hard as I could and nearly broke the dude's hand.  He immediately stepped down like, "Ah man, it wasn't me."  I'm like, no I'm pretty sure it was you and that’s why your hand hurts now—because you were being an asshole.  He walked away.  He must not have had to use the bathroom so bad anymore.

Varix played next on the big stage.  They were good but that stage was way too big for them, and as result, they sort of lost the crowd.  Lars arrived and we started pounding beers in a bad way.  Some dude sat on the edge of table that Lars had set his beer.  It flipped into the air and all over the Brown Sugar LP that I had just purchased from the Manipulation distro.  Dude gave us a look that pretty much said, "I'm not going to apologize for shit."  I had to physically stop Lars from pummeling this guy.  He wouldn't calm down until I reminded him that he probably doesn't want to go back to jail.

Once again back to the small/tent stage where In Defence did their thing that they always do.  I'm fairly certain that anyone that has made it this far knows what In Defence is all about, so I'll spare you the details.  I'll just say this: their performance and subsequent crowd reaction was enough to make the guys from Needles, who were watching intently from the side, decide they were going to play on the small stage instead of the ridiculous big one where they were scheduled.

By the time Martin and crew cranked out their first screeching note, the crowd had nearly doubled in size and everyone was seemingly wasted and/or psyched to see Oakland's Needles.  And they did not disappoint!  As with Martin's previous bands, energetic thrashy hardcore is the name of the game.  Big circle pits, empty pizza boxes being tossed about, and stage diving was just a few of the ways in which the audience reacted.  One dude even attempted to climb one of the poles that was holding the tent up.  Lars disappeared with some woman he knew from Black Label Bicycle Club for awhile.  I was pretty sure they were making out and/or snorting blow in the handicap honey bucket. But I was too buzzed and too wrapped up in the chaos to care.  Needles is the shit, man.

Inside for the late show, I caught Cognitive Dissonance's set on the bowling lane stage.  They pretty much get better every time I see them.  And I had just seen them last Sunday opening for Tragedy and I thought they were awesome then.  (Cog-Dis, like Brain Tumors is also on the HDD All City First Team.  Come to think of it, In Defence might be on there too--they will for sure make Second Team if anything.)  On my way out the door I ran into Lars, who confirmed my suspicion.  He had been making out AND doing blow in the handicap honey bucket with one of the girls from Black Label.  That is until some of the dudes in Black Label got pushy with him and made the girl leave with them.  That was probably for the better anyway.  I decided to call it a night, as I had some shit to do this morning, already had about seven beers, and little interest in seeing The Arrivals.  Plus there was no way I could keep up with a coked-up Lars the Heathen at this point.

On the ride home, I stopped at Cub Foods and bought a Red Barron, which I ate almost all of before passing out on the couch.  I never did that shit I was supposed to do this morning and I hate myself for eating like a pig.  Not sure how Lars’ night ended, but I’m crossing my fingers that it wasn’t in some sort of police standoff.  The end. 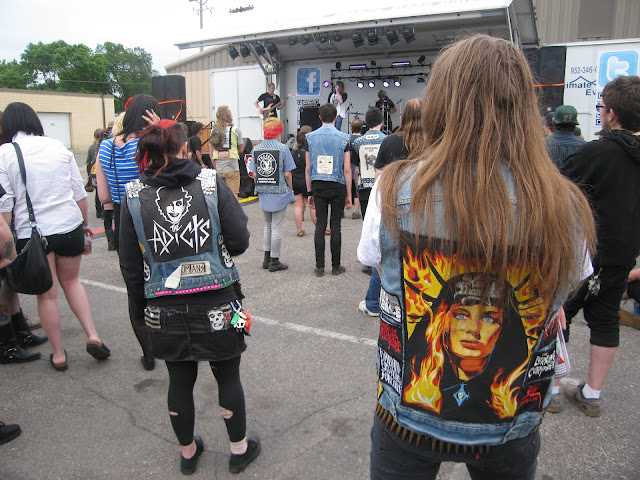 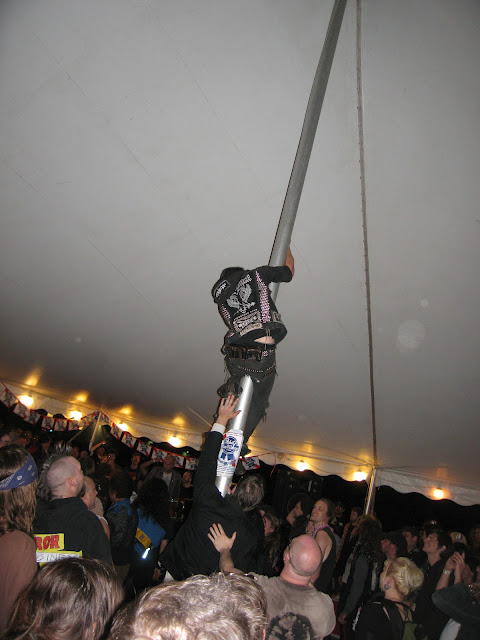