DVD Review: Dinosaur Jr. Live at the 9:30 Club-In the Hands of the Fans

Dinosaur Jr.-Live at the 9:30 Club: In the Hands of the Fans
By Nathan G. O'Brien on Scene Point Blank 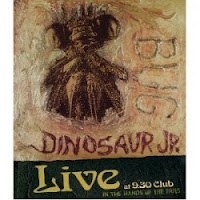 In 1988 Dinosaur Jr. released their third record Bug. Despite it being lead singer/guitarists and band leader J.Mascis’ least favorite outing, it was their most successful album up to that point.  While touring in support of it, tension between Mascis and bassist Lou Barlow, who had known each other since high school and played together in hardcore band Deep Wound in the early ‘80s, grew too large to ignore.  As a result, Barlow was kicked out of the band in ‘89.  He then went on to focus his energies full-time in his former side gig, the equally tumultuous Sebadoh and collaborated with singer-songwriter John Davis in the Folk Implosion. Surviving numerous line-up changes, Mascis trudged along with Dinosaur Jr, releasing several critically acclaimed albums and cementing himself as a pivotal character in the ‘90s alternative rock movement.  Fast forward twenty-two years: Bug has been included in the book 1001 Albums You Must Hear Before You Die, Barlow has since reunited with Mascis and original drummer Murph, and the band has announced they will be heading out on the road, playing the album in its entirety.  With that comes, Dinosaur Jr. Live at 9:30 Club.  ...read full-length review at this place.