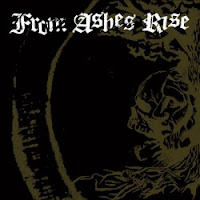 Formed in Nashville, Tennessee during the mid-‘90s American crust punk swell, From Ashes Rise later relocated to their current base in Portland, Oregon, where alongside fellow scene forerunners His Hero Is Gone, Tragedy and Hellshock, they helped cast the prototype for modern-day “epic crust punk”—a big sound that, while still rooted in anarcho-minded lyricism, apocalyptic imagery and D-beat, displays a noticeable focus on song structure; its hallmarks being slowish gloom, surging crescendos and crushing breakdowns.  Amid a persistent touring schedule, the four-piece have released three full-length records and a surplus of splits and EPs.  However, it’s been nine years since From Ashes Rise last released any new material. (Their highly extolled Jade Tree LP Nightmares came out in 2003.)  It’s clear from listening to their brand new two-song Southern Lord 7” Rejoice the End b/w Rage of Sanity though, that the formula hasn’t changed much in the interim.  Whether that’s a good thing or not is still to be determined.  ...Keep reading review here.