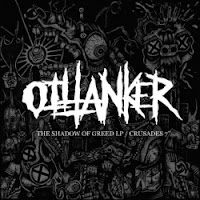 Hailing from Hartford, Connecticut, one of the oldest and wealthiest cities in the United States, on the surface doesn’t exactly scream crust punk, but Oiltanker’s existence is further affirmation of one of the most appealing aspects of crust, that it subsists virtually everywhere bubbling under the surface: angst-ridden, socio-politically conscious, and in stark opposition to the surrounding affluence and excess. And on Shadow of Greed/Crusades Oiltanker accurately conveys the infected scabbiness of fringe society one Dis-beaten track after another.  ...read entire review here.