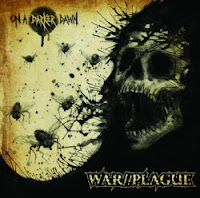 Minneapolis’ scene veterans WAR//PLAGUE have finally released their debut full-length LP On A Darker Dawn.  They are veering in a slightly different direction while still snarled up in their crust punk roots. The conglomeration of styles and genres is varied enough though that it makes it difficult to put a solid label on them. Sure, in simplest of terms they are crust, but they are also quite a bit more than that too. (I used to call them post-ambient black metal crust-core or something like that. But let’s be honest here, what the hell does “post-ambient” even mean?)

Much of the band’s progression in sound has to do with a new drummer coming aboard for this record. The D-beaten barrage is still aggressive as ever, but there are noticeable tempo shifts and double kick rolls abound, resulting in a fierce convergence of percussion. You need not look any farther than “The Holy Blood” as an example of how good death metal-like pummeling sounds when given the crusty treatment.  ...read full length review right about here.