Five Records to Look Forward to in 2013 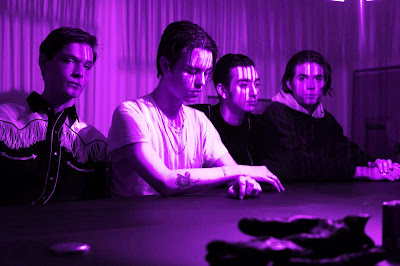 Black Face - Where Will We Run / Leave Me Out to Rot
In 2011 former SST Records co-owner and original Black Flag bassist, Chuck Dukowski formed a new band with Oxbow vocalist, author and ass-kicking enthusiast, Eugene S. Robinson. Black Face recorded four songs there were written during Black Flag’s My War era. Hydra Head released a 7” featuring two of them—Monster b/w I Want to Kill You—but the other two—“Where Will We Run” and “Leave Me Out to Rot”—have yet to see the light of day. This is purely hypothetical, considering the band called it quits in February of last year, but I remain hopeful these songs will be eponymously released in one fashion or another.

The Cave Singers – Naomi
Seattle’s moody indie folk/roots revivalist unit The Cave Singers are all set to release their fourth album, Naomi. Expanding to a quartet, singer Pete Quirk, guitarist Derek Fudesco and drummer Marty Lund brought in Morgan Henderson (Blood Brothers, Fleet Foxes) to play bass and some other instruments for this record. I’m anxious to see how expansive their dark, gritty, folk-blues compositions will get with additional musical arrangement.

Iceage – You’re Nothing
Despite a variety media-drummed hoopla surrounding its release, Iceage’s debut album, New Brigade still took me completely by surprise; and subsequently ruled my stereo for the better part of 2011. I’m not expecting to be blown away by You’re Nothing, but I am eagerly anticipating more of their brooding hardcore and goth-tinged post-punk.

Justin Timberlake – The 20/20 Experience
I am disappointed by “Suit & Tie,” the underwhelming debut single from Justin Timberlake’s upcoming album and the first new music we’ve heard from the man in roughly seven years. That being said, I remain wholeheartedly optimistic that The 20/20 Experience will at least equal, if not surpass, the splendor of FutureSex/LoveSounds. I need…check that, want…no, wait, I actually need this…I need this album to be tremendous, thus reconfirming that my biggest man-crush since Davey Havok hasn't happened without warrant.

The Replacements – ?!?!
Late last year it was announced that Paul Westerberg and Tommy Stinson were joined in-studio by Westerberg’s touring guitarist and solo artist, Kevin Bowe and drummer Peter Anderson, where they recorded an EP’s worth of cover songs as (gasp) The Replacements. (The Replacements!) In mid-January, the limited-edition 10" vinyl, Songs For Slim went up for auction online to benefit former Replacements' guitarist Slim Dunlap, who had suffered a stroke in February of ‘12. Covers are cool, and charity is beyond great, but here’s the real kicker: Westerberg has gone on record saying the band does not rule out touring or recording a new album. (Does not rule it out!)