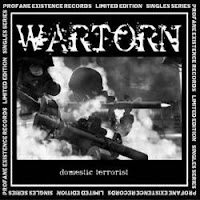 If you had asked me two years ago if I’d rather hear another Wartorn song or be kicked in the crotch by a Clydesdale that’s wearing a pair ice climbing cleats, I probably would have picked the option that left me crying in the fetal position with bloody underpants and no chance of ever having children. But with arrival of their new 7”—the March edition of the Profane Existence Single Series—it turns out that aside from the painfully (literally) obvious reason, it would have also been a really poor decision because I would never have heard these two tracks.  ...Entire review continues here.