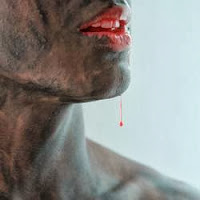 The songs “Moody Bitch” and “Addicted to the Blade” could be the soundtrack to a Southern California surf blog. You know, those ones with lots of pictures of skinny dudes wearing striped tee shirts under jean vests, with sailor caps on and stuff. Maybe throw in a button or patch with a picture of an anchor on it and a wrist band that used to be the top of tube sock. Yeah, you get it.  ...Read the entire review on the next page.