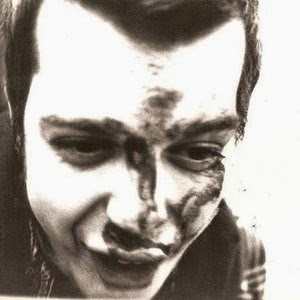 This review by Nathan is an excerpt from issue #3 of The Soda Killers fanzine. We still have a few laying around. Let us know if you want a copy and we'll get it out to you ASAP!
-BNB

Jesus H Bombs - Push the Button 45 (Bookoven / Tibs Ribs, 2006)
By Nathan G. O'Brien
I don’t know anything about this band or the mysterious person that sent it to me.  Being part of the zine-trading and mail art underground, it’s not uncommon for strange packages to show up in my mailbox, but usually there is at least some sort of note attached.  Not with this one though. On top of that, many of the liner notes are illegible – particularly the part that says when and where it was recorded.  Over various points in the early to mid-‘00s, I think.  The package was sent from Illinois, so my guess is they are, or were, from the Midwest.  Living in Minneapolis, it’s possible I’ve crossed paths with these guys, but I literally do not remember.  Anyway, I thoroughly revel in their snotty, brash approach to punk-y hardcore.  Reminds me of Oppressed Logic, or even, in what is perhaps an odd comparison, a sped-up version of street punk like The Bristles.  And since we’re referencing ‘90s –era Beer City bands here, I’ll just go ahead and say the vocalist sounds like a younger, less-partied-out Bob Murderer.  A guy could probably have a real swell time drinking a million cheap domestic canned beers to this.