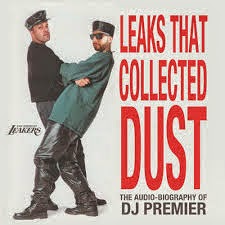 Too Many Rappers: July 2014
By Nathan G. O'Brien for Scene Point Blank

7/18/14 - Minneapolis, MN
Commuting earlier than usual this morning means it’s nice and cool. I ride by a kid who’s wearing an old 3rd Bass tee shirt and give him an approving Malcolm X-style fist in the air. He nods his head back at me like, “Yeah, that’s right, this is a 25 year old fucking 3rd Bass tee shirt.”

For some strange reason as I pedal over a set of tracks I think of the waitress at the Northbound Smokehouse & Brewpub who once served my wife and me excellent wings and mediocre IPAs. She looked like Dolph Zigler, which I found equal parts disturbing and sexy. My love affair with professional wrestling is not something I'm sure I'll ever understand.

I stop briefly to slap a custom sticker on the back of a Yield sign. It will be gone by the time I ride home tonight; scrapped off or grayed out by the Greenway Vigilante. It’s me versus him/her on a daily basis. Gray is a great color; versatile and understated…for an outfit. But holy shit is it ever rage-inciting when it’s covering someone’s free public art offering. In my eyes, unsolicited buffing of graffiti and/or street art on public property is the same type of offense as artists going over each other. Not cool.

Waiting at a stop light like a decent law abiding citizen (which I do realize sounds rediculous, considering the previous paragraph) a women blows by me, through the light, and spits in my general direction. I playfully shout to her, “Yeah, that’s my girl.” She looks back and says, “Shut up creep.” I then reaffirming-ly say to only myself, “Yeah, that’s my girl.”

In the earbuds Sonic Youth’s “Washing Machine” is transitioning into “Unwind” just as I pull up to work and the last thing I want to do is get off my bike. I just want to keep riding...to like, the suburbs or some shit. But then I'd be in the suburbs. Work or the suburbs? It's like voting for President.

As I’m locking up I am met by a man named Zygon. He’s actually the second person I’ve met named Zygon in recent times. He wants to sell me a photocopied chap book for five dollars. Instead I trade him a zine for one. These days I’m increasingly less interested in—dare I say irritated by—poetry. But I got mad love for my fellow DIY self-publishers. We shake hands and part ways. After he’s out of sight I feverishly tear through my bag looking for hand sanitizer because that’s just the kind of miserable asshole I am.

As soon as I’m done thumbing this out on my phone like some type of goddamn zombie, I’ll walk into work. I’ll wonder, just like I have every day for what seems like forever, if this one will be my last time. And if it is, at least I’ll be able to ride my bike home on a nice day. I’ll probably listen to The Cactus Album on the way.


Read the rest of Too Many Rappers complete with mixtape and album reviews here.